When we grow up, most people stop believing in magic. Everything that happens to us has to have a logical and coherent explanation so that it fits in with our mental schemas. However, there are adults who prefer to think that something exists beyond the laws of physics. In fact, they believe that extraordinary energies and worlds exist. Or, their superstitions tint their daily lives with magic.

In this article, we bring you some explanations of why and how our belief in magic evolves.

When talking about magic, certain beliefs and fantastic facts come to mind. For example, the belief that the tooth fairy comes at night to collect teeth and leaves a coin in return. Or, the magician who cuts the body of a volunteer into three without leaving a mark.

In a more technical way, magical thinking is defined as the attribution of the causes of real events to actions or thoughts that aren’t physically connected to them. According to theorists, there are four characteristic reasons for belief in magic that are common to the examples given above:

In short, to believe in magic is to think that there are events or beings that defy space, time, and the characteristics of matter. They violate the fundamental laws of nature.

What makes us believe in magic?

From an anthropological point of view, belief in magic has been a key element. In fact, it helped to explain sensations and concerns for which there were no explanations. The same thing happens throughout evolutionary development. In childhood, the stage between approximately two and seven years of age is characterized by symbolic thought.

Piaget claimed that, in the preoperational stage, children give a fantastic or magical meaning to what they don’t understand. At this stage, the first irrational fears appear that children try to understand through fantasy. On the other hand, they begin to manifest wishes and place their hope in magical creatures that fulfill them.

For example, not wanting to be in the dark in case a monster appears or waiting for Santa Claus to give them the bicycle they want so badly. It could be said that they need to create a parallel world where anything is possible and everything can be solved.

Why do we stop believing in magic?

However, around the age of seven, this stage comes to an end and gives way to the stage of concrete operations. At this age, children are more cognitively prepared to differentiate the real world from the fantasy world. This occurs because they can think more logically and operate through rules and assumptions. More specifically, they stop believing in magic because they acquire the following abilities:

However, what happens to adults who continue to give magical explanations to certain events? Is it that they don’t reach this later stage of development? The evidence found in this regard is, to say the least, interesting.

Although not many studies have analyzed this question, some evidence suggests that magical thinking doesn’t decrease throughout life. At least, not until the end of adolescence. In fact, one of the explanations that researchers have put forward is that belief in magic becomes selective. In other words, the experiences and knowledge we acquire throughout life will determine to which events we apply magic.

For example, if you have advanced knowledge of physics, you’ll use its laws to explain why an object appears to levitate. However, if your arithmetic skills aren’t so good, when faced with a magic game based on numbers you might think of it as magic.

An interesting study found that, as the age of the participants increased, cognitive and emotional defenses against magic were manifested. In other words, when faced with an event that they couldn’t explain, they attributed the disappearance of an object to their own lack of attention. Or, faced with the proposal to submit to a negative ‘magical suggestion’, they rejected it out of fear or a feeling of threat.

In addition, the researchers presented adults, all disbelievers in magic, with two hypothetical scenarios. A witch came up to them on the street and offered to put a magic spell on their future lives. In one scenario, they were offered the chance to be rich and happy (good spell). In the other scenario, they were asked to serve evil forces (bad spell). They were asked if they would accept or decline the spell. There were also two conditions, one in which they would be personally involved and the other where the scenario concerned an imaginary character.

The hypothesis was that, if the participants didn’t believe in magic, as they professed, they should react in the same way to both spells. In the non-involvement condition, the results for both spells were similar. Around half of them said that the character should accept both the good and bad spells. However, in the scenario where the participants thought they were personally involved, 50 percent of them accepted the first spell but they all declined the bad spell. Despite their proclaimed disbelief in magic, it seemed they were worried the bad spell would affect their lives in some kind of magical negative way.

Believing in magic seems to be something that we all carry inside us in a certain way. However, cognitive development and the search for logical explanations compensate for the frequency with which we turn to their arguments. In addition, in adult life, it’s difficult to live in the contradiction between the laws of nature and magical experiences, although we maintain, on many occasions, some superstitions.

Throughout our lives, we sometimes, but not always, find coherent explanations. Indeed, although science and logical reasoning have taken their toll on us, we shouldn’t disregard fantasy. Thinking that some of the most beautiful things that happen to us have no explanation is magical. Above all, it fills us with hope. 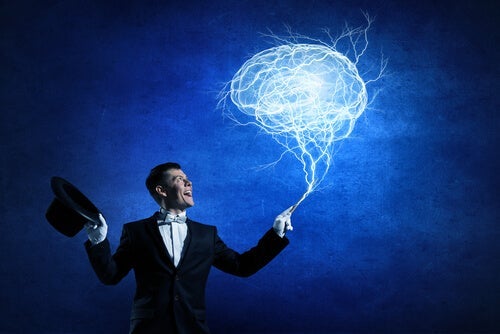 Magic and the Brain: How Are They Related?
Is the hand quicker than the eye? Researchers have been studying the relationship between magic and the brain for a long time. Read more »

The post Why Do We Stop Believing in Magic When We Grow Up? appeared first on Exploring your mind.