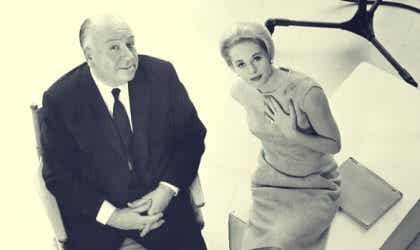 Hitchcock left the UK behind and crossed the Atlantic in order to take advantage of the Hollowood boom. His American adventure began with the film, Rebecca (1940).

However, although the film was an undoubted success, in reality, the filming of Rebecca wasn’t as fascinating as one might expect. As a matter of fact, although the United States had the technological advancement, financial means, and opportunities that every filmmaker could ever dream of, it also had a dark side that, apparently, Hitchcock didn’t like at all.

In the UK, Alfred Hitchcock enjoyed great creative freedom. Indeed, there, producers barely intruded on his films and let ‘the master of suspense’ tell stories in his own way. However, the production of Rebecca was in the hands of David O. Selznick, the famous producer of such blockbuster films as Gone with the Wind.

Most of the filmmakers who worked with Selznick say that they enjoyed a fair amount of freedom. Furthermore, it was said that he was particularly benevolent with Hitchcock. Nevertheless, it seems that the British director didn’t like taking orders from him.

Throughout the filming and production, there were several clashes. Hitchcock wasn’t used to the frenzy of the United States and he worked in a slower way. Furthermore, he didn’t allow his arm to be twisted. That’s because he knew what he wanted and how he wanted to do it.

Selznick wanted to supervise some of the scenes in the film. In fact, he was extremely meticulous with the script and didn’t want it to stray too far from the original novel, Rebecca by Daphne du Maurier. Despite this fact, Hitchcock enjoyed great freedom on set and even returned to work with Selznick later. Nevertheless, their relationship never really worked well.

Ultimately, the film was successful. In fact, to this day, it remains one of the most acclaimed of Hitchcock’s works. Right from the start, the film is extremely powerful. We see the immense mansion, now in ruins, which seems to be the reflection of what one day shone so brightly, and of a past that hasn’t yet completely departed. Along with the voiceover, it evokes a mysterious and dreamlike sensation.

What we see next feels like a dream, in which the past and the present intermingle, and the world of the living and the dead converge.

The magnitude of Rebecca goes way beyond what we actually see on the screen. Indeed, when we watch a movie, we mustn’t forget that we see what the filmmaker wants us to see. In fact, they direct our gaze and our attention and leave nothing to chance.

If we add to this mix a master like Hitchcock, it’s hardly surprising that many of the elements in this film are so revealing. As a matter of fact, everything, from the camera movements to the costumes, to the set, says a great deal.

Hitchcock claimed that he saw the audience as the keys of a piano that he was pressing. Without a doubt, whenever we see a movie of his, although we know in advance that his aim was always to surprise, it isn’t long before stronger feelings of real trepidation and intrigue envelop us.

As a matter of fact, the master of suspense knew exactly how to hit the right button at the right time. He knew when to reveal information, and where to direct our gaze in order to make us believe something. Indeed, in this film, there are many times in the plot that we succumb to his deception and subsequently realize that they were red herrings.

Hitchcock was a master of staging. He knew how to tell a story, how to direct the characters, and how the camera should film them. For example, if we observe the characters in this film, how they move in each scene, and the way in which they’re choreographed, we can see that all of this conveys important information.

For example, a character may be giving a speech and, thanks to his gestures, we know if they’re lying or not. In fact, with Hitchcock, it’s extremely interesting to see how the characters – and the camera itself – undertake a kind of choreography that gives us clues about what’s going to happen next. For instance, we know which character is dominant at any particular time, and who we’re going to follow next, etc.

In the case of Rebecca, Hitchcock wanted the female lead, played by Joan Fontaine, to look naive, insecure, and ultimately shy and harmless. How did he do it? By making the actress herself feel small.

Indeed, the master of suspense decided that it was a good idea for Joan Fontaine to feel insecure throughout the entire shoot, even behind the cameras. For instance, a rumor reached the actress’s ears that all of her co-actors hated her. Similarly, her co-star, Lawrence Olivier, received instructions from the director himself to treat her coldly.

In this way, Joan Fontaine felt uncomfortable and further identified with her character. Furthermore, this impression of naivety and insecurity was reinforced by the shots and camera movements.

Therefore, throughout the film, Hitchcock isolated Fontaine. In addition, he moved the camera away and strategically placed it so that we see the young woman as extremely small compared to the imposing walls of the mansion. This contrast in size produces in the viewer a certain overwhelming feeling of anguish over the situation in which the protagonist finds herself (locked up). In fact, it seems that the sinister house, seen in ruins from the beginning, has ended up oppressing the protagonist.

However, as the film progresses and the protagonist manages to destroy the monsters of the past, the camera gets closer to her. Then, we’re offered close-ups full of light that contrast with the darkness that previously tormented her.

The protagonist is now strong and able to face the superb Mrs. Danvers. At last, the second Mrs. de Winter has found her place and sees herself as the true mistress of the house.

The presence of the past

The mansion is a character in itself. Its past seems linked to its walls. Furthermore, it deceives and suffocates the protagonist, inviting her to compete with the late wife of her new husband.

At first, everything seems like a fairy tale, an impossible love story in which there are no class differences or barriers to crush the lovers. However, when they return from their honeymoon, the ghosts of the past attempt to put out their flame of love.

In this respect, Hitchcock does an excellent job with ellipsis. In fact, from the romantic moments in the beginning, he leads us straight to the terrible mansion.

The honeymoon only appears as a projection on a tape, telling us that the happy moments are no more. In fact, they were as fleeting and as fragile as the tape on which they were recorded. The past has its projection in the present. Indeed, Rebecca’s image seems to have never left the mansion that was her home before she died and she constantly reminds the protagonist that it isn’t her home.

Rebecca’s presence is so intense that we almost feel like we’re seeing her on stage. We hear her footsteps, her laugh… it even seems that can see Mrs. Danvers combing her hair. Indeed, the scene that takes place in her bedroom is one of the most interesting as Hitchcock manages to capture the very essence of Rebecca, in effect, freezing a moment in time.

As we’re told, nothing has been touched since Rebecca’s passing. Furthermore, her presence is stronger than ever. It seems that the world of the living and the dead mix. The endless curtains help in creating that ghostly image.

Furthermore, there can be no image more ghostly than that of Mrs. Denvers hiding behind Rebecca’s curtains as if she came from beyond. In fact, as if she’d been in contact with the late lady of the house. In fact, although we don’t see Rebecca at any time, it’s as if we know her. For instance, the characters describe her, we enter her room, and the camera seems to move with her shadow.

Hitchcock directs our gaze through the spaces that Rebecca traveled, the camera following the ghost as Mr. de Winter tells his story about Rebecca’s death.

However, everything we were led to believe about Rebecca’s relationship with Mr. de Winter was nothing more than a hoax, a mirage. In fact, Mr. de Winter confesses his secret and, at that moment, his new wife loses her innocence: “It’s gone forever, that funny young, lost look I loved won’t ever come back. I killed that when I told you about Rebecca. It’s gone”. No, that innocent look won’t return for him, but we, as viewers have also lost it. Then, we start to ask ourselves, what really happened to Rebecca?

As usual, the master of suspense has anticipated our feelings, entered our minds, and led us to believe in a story that, like Rebecca’s ghost, is but a distorted shadow of what it really was. However, the story takes a fundamental turn and the character of Joan Fontaine puts her insecurity and innocence aside.

Interestingly, although color cinema already existed, Hitchcock wanted Rebecca to be shot in black and white. The result is a haunting, ghostly film in which nothing is what it seems.

“Sometimes, when I walk along the corridor here, I fancy I hear her just behind me. That quick, light footstep. I could not mistake it anywhere…It’s almost as though I catch the sound of her dress sweeping the stairs as she comes down to dinner. Do you think she can see us, talking to one another now? Do you think the dead come back and watch the living?” 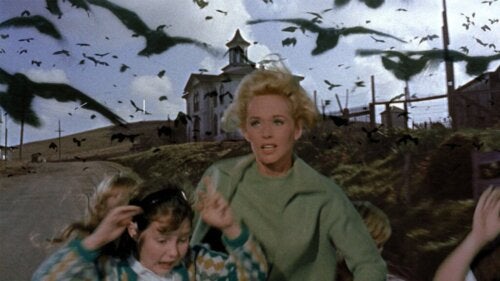 The Birds: Unleashing Ornithophobia
The Birds is a film that could trigger ornithophobia in the greatest bird lover. Learn more about this classic Hitchcock horror movie here. Read more »

Philophobia: Being Afraid to Love