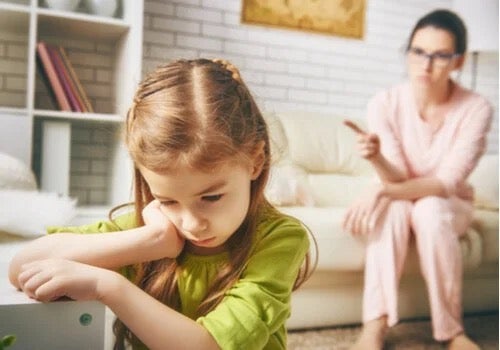 Discipline is a behavioral technique that parents use to reduce certain types of behaviors. When they use it appropriately, it’s a powerful tool that modifies behavior. However, many experts have undermined the use of discipline in the education of children and adolescents and its role in interpersonal relationships. This is known as the discipline controversy.

The problem with discipline is that people rarely apply it skillfully. Therefore, they don’t achieve their desired results. In fact, discipline can be a dangerous tool. When people don’t use it properly, it can be extremely hazardous. For this reason, the field of psychology has considered the discipline controversy a major issue over recent years.

How does discipline work?

Discipline usually consists of the application of an aversive stimulus in order to decrease the repetition of certain behaviors. It’s more effective when administered immediately. It has no secondary gains.

Before a parent disciplines, they need to consider what kind of reinforcement they’ll use and how it’ll work. Reinforcement works differently for each individual.

The difference between positive and negative punishment

On the other hand, negative punishment withdraws a positive stimulus after a child performs an undesired behavior. For example, the parent withdraws the privilege of allowing the child to choose where they go on vacation.

The discipline controversy: is punishment lawful?

However, on certain occasions, it seems that positive punishment or punishments that inflict pain are necessary. This happens in cases of dangerous behavior, when physical punishment seems to be the only effective method of suppression.

Clinical practice demonstrates that certain self-harming behaviors in patients, requiring intervention, can be effectively suppressed with positive punishment. Later, when the patient stops the behavior, a reinforcement program will help.

Therefore, it isn’t practical to label discipline as something that’s inherently wrong. In fact, it’s more beneficial to focus on its appropriate use in both measure and intensity. In addition, to check, in each individual case, whether the process of reinforcement is effective or not.

The discipline controversy: the drawbacks of discipline

Here are some of the drawbacks that can occur when people don’t implement discipline properly.

These difficulties show that indiscriminate, aimless, and emotionally-fueled punishments can be dangerous. In fact, these problems indicate precisely why a controversy exists concerning the use of discipline.

The appearance of aggressive behavior

Numerous studies in comparative psychology (with animals) show that painful punishment causes animals to attack their peers. This should make anyone think twice about the value of physical punishment before they carry it out. They should also consider what they want to achieve by taking this action.

The appearance of conditioned emotional responses

Fear is an extremely maladaptive response. In fact, it’s the most notorious element of the discipline controversy. A child should never learn through fear. In addition, if a child gets upset and afraid, this prevents them from learning that they need to change their behavior.

Since the goal of punishment is for the child to change their behavior, the parent should think before they act. If they want to make their child afraid of them, they certainly aren’t implementing discipline properly. Furthermore, this kind of action should be completely condemned.

The generalization of aversion should be taken into account. Punishing a certain action can lead to the aversion becoming a conditioned behavior relating to that particular stimuli. For example, if a girl is punished for not scoring a goal in a soccer game, she may then associate sports, gym classes, sports teachers, and games with negative emotions. She’ll then subsequently avoid all those stimuli. Therefore, instead of increasing her sporting ability, it’ll have the opposite effect. As we mentioned earlier, fear leads to an escape response which prevents the learning of alternative behaviors.

Problems with alternative behaviors and modeling

Frequent disciplining behavior that fails to work can lead to habituation. In other words, the child no longer considers something unpleasant. For example, if every time a child misbehaves, the parent takes their toy cars away, the child may eventually get used to it and no longer care. In these instances, the parent might try increasing the intensity of the punishment by removing other toys as well.

Considering that discipline frequently isn’t implemented properly, and the possible negative consequence of this, experts recommend using the method of reinforcement of desirable alternative behaviors.

Discipline is useful when, at the same time, parents reinforce the desired alternative behavior. However, they often don’t carry this last part out. This is because it isn’t as easy as simply punishing.

In conclusion, when parents carry out discipline in a responsible and measured way, and with an ultimate goal, it might solve the discipline controversy.

The post The Discipline Controversy: An Ongoing Debate appeared first on Exploring your mind.