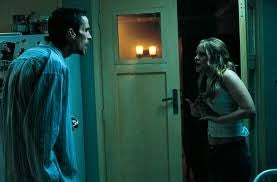 Christian Bale doesn’t seem to worry too much about physical changes. He surprised us by gaining weight to portray Dick Cheney in Vice. However, this wasn’t the first time that he underwent a drastic change of image. In 2004, The Machinist, a movie by Brad Anderson, appeared in movie theaters. It was a psychological thriller in which not only was Bale unrecognizable, but he also managed to upset a good part of the viewing public.

Indeed, the extreme thinness of the character of Trevor Reznik made the audience extremely uncomfortable. His physical appearance, in reality, was nothing more than a reflection of the character’s tormented interior. In fact, the movie completely revolves around Trevor and the mysterious conspiracy against him. As viewers, we don’t know whether to empathize or distance ourselves from him.

Trevor works as a machinist in a factory and has been unable to sleep for a year. He’s a difficult character whose behavior keeps others away. In fact, even as viewers, we reject him. After a serious accident at the factory, Trevor’s life takes an unexpected turn. This leads him down a hostile path between sanity and madness.

The Machinist is a film that delves into the psyche of its protagonist, who slowly reveals why he’s so strange and has been unable to sleep for a year.

In this article, we’ll try not to give any spoilers in case you haven’t seen the movie, but we’ll reveal a few details about the plot.

What’s happened to him?

This is the question that haunts our minds. As viewers, we’re used to empathizing with characters, who always tend to arouse a certain interest in us, whether they’re good or bad. In this case, it’s not that Trevor Reznik doesn’t arouse our interest, it’s that we don’t know if we want his plans to come to fruition or not. In effect, we don’t know whether to trust him or not.

From the first minutes of footage, we see a man who’s completely deteriorated in the physical sense. Indeed, his extreme thinness and lack of sleep result in a cadaverous face that clearly also indicates some kind of problem. In fact, we soon realize that something is wrong with Trevor. Moreover, the lack of sleep has taken its toll on him. However, we don’t know why he can’t sleep. That’s where the magic of the movie lies.

In a thriller that often verges on terror, we’re carried away by an uncomfortable, dark, and tragic narrative in which the pieces of the puzzle seem fuzzy.

We don’t know if Ivan, the new operator who torments Trevor, is real or a product of his imagination. Nor do we fully understand Trevor’s relationship with the two women in his life. Maria is a waitress and Stevie is a prostitute with whom Trevor has a close relationship. Has he always known them?

We know little or nothing about Trevor’s past, even though the movie starts with a final scene. However, we’re gradually given clues. The fact that a series of post-it notes appear on his fridge with a game of hangman though is rather difficult to believe, even more so when Trevor tries to complete the game.

We start to speculate and think that all the problems in his life derive from his insomnia. Clearly, something has gone wrong and there’s a deep problem affecting Trevor emotionally, but we can’t figure out what it is. How did he get to this state? Has he always suffered from insomnia? Has he always been a tormented individual?

The movie doesn’t give too many clues, although it’s not difficult to work out that some traumatic episode has led to his strange behavior.

The key lies in the staging

At all times, the movie moves in a monochrome environment and cold shades of gray and blue permeate the screen. Somehow, these colors evoke certain feelings of mistrust, anguish, and discomfort in us. The green we see isn’t bright but cloudy, like the color of stagnant water. Indeed, the representation of green tones awakens in us a feeling of rejection, betrayal, and manipulation.

In a way, that dull, grayish, and dirty green tone corresponds to Trevor’s truth and the mental manipulation to which he’s being subjected. However, we don’t know where it comes from. We don’t know if it’s Ivan, one of his friends, or Trevor himself who’s exerting such pressure on his mind.

The same happens with the blue tones. They’re a constant throughout the movie. Once again, it’s not a bright but a cloudy blue that evokes the world of dreams, the world that Trevor is unable to reach.

Blue can be interpreted as a deception to our senses, a falsehood, due to its link with dreams. What we’re seeing isn’t entirely real, but a kind of mirage of reality.

The scenery is full of illusory, cloudy, and uncomfortable colors, through which the strange, taciturn, and mysterious characters move. The night also takes on special importance, as does Trevor’s work environment, which is presented as hostile and too mechanical. All these negative visual connotations accentuate the movie’s intrigue and serve as one more element in the narrative that provides certain sensations to us, the viewers.

We soon realize that Trevor’s mind often plays tricks on him. Between his forgetfulness and misleading visions, he finds himself involved in a chase, in a fight with his own self. At this point, we wonder if he’s suffering from post-traumatic stress disorder. He certainly seems to be a victim of himself and his mysterious past and the unknown fact that’s preventing him from falling asleep. 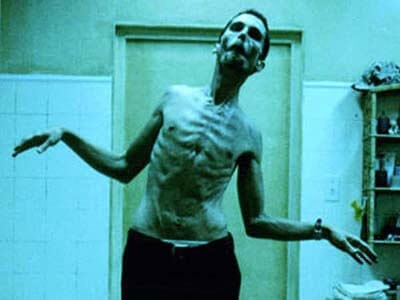 Terror is in the mind

As we mentioned earlier, the scariest thing about the film is the protagonist himself and the strange events that take place in his apartment as a result of an accident at the factory. We’re kept in a state of uncertainty. We doubt Trevor and, yet, at the same time, we want to discover something positive in him. We simply don’t know the origin of his problems.

Everything seems to point in the same direction, toward the human mind and its fragility. Far from believing in strange conspiracies, we adopt a stance that points to the protagonist’s mind as the culprit.

To a certain extent, we’ve all suffered from the problems caused by a sleepless night. Therefore, we understand the idea of a conflict that’s triggered by spending a year suffering from constant insomnia.

However, to what extent can our senses deceive us? To what degree can a lack of sleep affect us in our daily lives? We continually try to decipher the keys to this enigma. It’s a puzzle that manifests itself in the form of a hangman game that Trevor completes with a pencil except when he finally understands the truth. Then, he uses a permanent marker. This marks a decisive turn on his road to acceptance and overcoming his problem.

The Machinist contains terrors that are far from the supernatural. The defense mechanisms of the protagonist’s mind interfere in a story that’s perceived almost in the first person. We see what Trevor sees, what he feels and, although we distrust it, it’s the only truth that we have before our eyes.

The Machinist is a film based on works such as Dostoyevski’s The Double (1846) and Roman Polanski’s The Chimeric Tenant (1976).

In short, this is a movie that adopts, in the style of a thriller, a terrifying story in which everything revolves around a human being and his mind and psyche. It certainly doesn’t leave us feeling indifferent. In fact, although the problem is ultimately solved, it provokes lingering doubt and bewilderment in us, the viewers.

The post The Machinist: A Year Without Sleep appeared first on Exploring your mind.

The Bipolar Spectrum: The Different Types of Bipolar Disorder