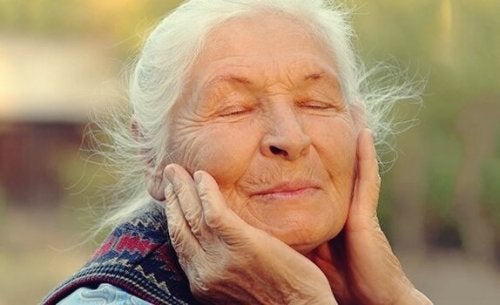 Vortex is a visual experiment, and perhaps also the most human in the history of cinema. There are no lengthy scenes of violence. There are no harrowing psychotic episodes. There’s not a sign of blood. Nevertheless, it’s devastating.

In reality, none of us would want to play the starring role in Noé’s account of insanity. Indeed, Vortex is a long way from movies like The Notebook or Amour. The latter is also a tough movie, but it portrays reassuring ties between the elderly. On the contrary, Vortex portrays dementia as a harsh world that sufferers live in but that no longer belongs to them.

There are no survivors in this scenario. However, the movie is neither pessimistic nor a recreation of pain. It’s the portrayal of a reality that no one would want to find themselves in because of its extraordinary destructive power. It’s a movie that we wouldn’t necessarily recommend, but that we hope everyone sees. It tells the story of how ordinary people get sick and die.

The movie that silenced Cannes

The provocative Gaspar Noé glued people to their seats in Cannes. In fact, this provocative Franco-Argentine shocked them with his change of pace. It’s an extraordinary movie that follows the painful last steps of an elderly couple in their Paris apartment. Critics were all in agreement (something that happens rarely and is reserved for a select few) that Noé’s change of course was resoundingly successful.

Fueled by the deaths of several close friends and Noé’s own recent experience (a brain hemorrhage in 2019), the movie tells a story of disembodied fears. We see two old people creeping around a small apartment. They’re a married couple played by the Italian filmmaker, Dario Argento and the French actress Françoise LeBrun.

The husband suffers from a heart condition and is working on a book about the relationship between cinema and the unconscious, trying to abstract himself from reality with narratives far removed from his own present circumstances.

His wife is called Kiki. She’s a retired psychiatrist who’s suffering from dementia but continues to write prescriptions for them to ensure that they both have medication. This is the only activity that seems to entertain her. Seeing the pills, counting them, ordering them, and counting them out again. It’s as if her hands want some contact with reality and with the life she used to have.

The couple has a son who loves them and recommends that they go to a nursing home, where they can get professional care. But his father flatly refuses: if he has any intellect, dignity, and humanity left, it’s because he’s still at home. His home is everything. Even though it’s little more than a museum of his now obsolete works.

In fact, the houseful of books is, for the viewer, pretty disturbing. Indeed, there’s an ocean of knowledge contained in books, paintings, and pieces of art that contrasts with the cognitive state of the couple. It’s extremely disheartening to see how there’s nothing a human being can do to prevent their decline, no matter how much culture they may be surrounded by.

However, despite everything, they both love and care about each other’s well-being. But, in old age, they’ve become like a pair of animals sharing the same cage.

An experience in the foreground

The storyline stirs up inescapable memories of Michael Haneke’s, Amour, which won first prize at Cannes in 2012. Except that Noé’s movie is darker and more sordid, with less affection between the protagonists. They’re both jaded in a not-so-romantic way.

Noé’s movie is filmed in split screen, with two handheld cameras focused on the protagonists at all times. We see their hunched bodies and pained faces in dimly lit places and cramped rooms. There’s no happy ending for these people, who are made of the same stuff as us.

In one scene, the old lady starts touching things on her husband’s desk, only to end up throwing his latest script in the trash. At first, we connect with her, but in the end, we have more sympathy for her husband and his desperation. He demonstrates human emotions that we all experience. We forgive him his anger and his words.

On the other hand, the state of the old woman worries us. In fact, we don’t really know what we’re looking at. She reminds us of our worst days when we’re sad and disorientated, maybe suffering a migraine, a memory lapse but one that’s reversible and recoverable. But she reminds us, with her whispering and the maddening way she treats the objects around her, that we’re all going to eventually reach old age and the same fate.

A death and farewell like the one we’ll all experience

With the death of Queen Elizabeth II, much of the world witnessed the tears of her children. In fact, the news of their loss reached practically every corner of the planet. That said, in stark contrast, millions of elderly people are living, on a daily basis, in conditions of misery, abandonment, and disease.

As a matter of fact, we’re closer to living their kinds of stories and endings. Although the care and geriatric model will change over time, we’ll age and die like this.

Is it social modesty that prevents us from seeing such a story on television yet not worrying about our own elderly? We need to remember that age is cruel and ruthless. We need these kinds of stories that show us reality. The kinds that provoke in us a social, medical, and psychological change in our approach to the problems derived from aging.

In the end, it’s only our houses, whether they be big or small, that’ll be left standing underneath the immensity of the sky in a world in which we broadly mean nothing. But we do mean something in terms of humanity. That’s what this movie is about. It means not looking away from the screen when what we see isn’t fantasy. These are our own stories, they’re just interpreted by others.

Regulating Emotions in Old Age: The Key to Wellbeing
Correctly regulating emotions in old age is an exercise in health and well-being. Older adults are, on average, much more attuned to positive emotions. Read more »

The post Vortex: A Searingly Honest Account of Old Age and Dementia appeared first on Exploring your mind.