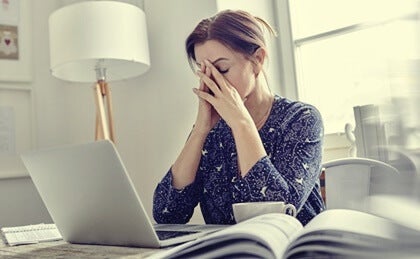 Intuition tells us that thinking is tiring. Indeed, it’s not difficult to come to this conclusion, since we’ve all experienced it firsthand. For instance, you only have to carry out a really demanding intellectual activity. Once you’ve started, it won’t be long before you realize how your brain loses its agility, in much the same way that your muscles tire when you exercise.

A group of scientists from the Pitié-Salpêtrière University (France) conducted research to try and discover why thinking a great deal makes us tired. They concluded that there’s a point at which intellectual activity begins to produce neurotoxic substances. The kinds of substances that are harmful to the functioning of the brain. This is preceded by the accumulation of lactic acid in the muscles. However, some of the results of the study are questionable. Nevertheless, this doesn’t mean that it doesn’t provide valuable information on the phenomenon of mental fatigue.

“Our findings show that cognitive work results in a true functional alteration — accumulation of noxious substances.”

Thinking too much is tiring

Science has found that mental fatigue is a kind of alarm signal sent to the brain. It’s an indication for us to change the activity we’re doing for another, less demanding, and more rewarding one. In fact, fatigue operates as a protector of brain function – just as it prevents us from injuring ourselves. Unlike a machine, the brain has limits on its activity. When it reaches them, self-protection mechanisms are activated. This occurs, for example, when you begin an activity that’s cognitively demanding.

Scientists have now discovered that this isn’t only linked to the brain’s natural limits. It’s not just a matter of saying “Enough is enough, I need to rest”. As a matter of fact, while fatigue is manifesting, substances that are potentially harmful to the brain are also being produced. That’s what generates the alarm signal.

The researchers of the study we mentioned earlier wanted to find out why mental work is as tiring as physical exercise. They recruited 50 volunteers with the aim of carrying out a series of tasks for six and a half hours, continuously. This period of time corresponds to a normal working day in France.

The volunteers were divided into two groups. One of them was given a large number of tasks to perform, while the others had fewer. Basically, they had to carry out memory exercises with letters, numbers, and colors. As they did so, they were monitored by an eye-tracking system and magnetic resonance imaging.

Eye tracking was intended to track changes in the participants’ pupils. Some previous studies had shown that they contract when demanding intellectual activities are carried out. On the other hand, the MRI sought to explore whether there were any appreciable changes in the brain that differentiated one group from the other.

It was found that there was less dilation of the pupil in the members of the group who had to carry out more intellectual activities. It was also found that, in this group, there were more behavioral changes. In fact, they tended to seek activities that required less effort but provided more gratification.

Also, and this is the most relevant finding, they discovered that people who worked more had higher levels of glutamate in the prefrontal cortex of their brains. Although this substance participates in the activation of brain functions, when it accumulates, it has the opposite effect. In effect, it causes our mental performance to decrease. Deep down, this would be the biological cause of why thinking a great deal is tiring.

Is there a way to reverse this condition? To date, we know that the only thing that allows our brains to return to optimal performance is rest. We need to stop doing those intellectual activities and do something less fatiguing. We also need to sleep. In fact, when we sleep, our brains undertake a kind of ‘cleaning’ process to put things in order. For this reason, if you want to have a healthy brain, you should never ignore mental fatigue.

Mental Fatigue and Exhaustion – Possible Causes
Your seemingly unexplained mental fatigue is often overwhelming and it isn’t necessarily due to physical exertion. It mainly lurks around in the background. Read more »

The post Why Does Thinking Make Us So Tired? appeared first on Exploring your mind.