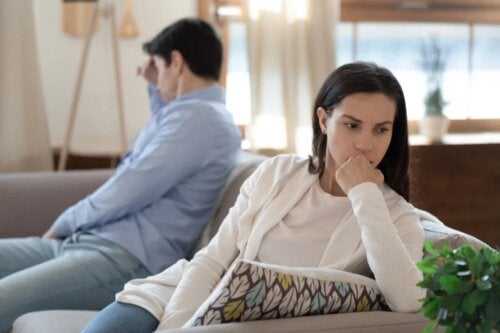 We’ve all experienced it at some point. After a fight, your partner stops talking to you, doesn’t respond to your attempts to interact, and completely ignores you. This kind of silent treatment can be frustrating, exhausting, and demotivating. It can also cause irreparable damage to your relationship.

It can happen in any relationship: family, friends, colleagues, or schoolmates. However, in romantic relationships, it’s often even more harmful, given the special place that partners play in our lives. These situations are never easy to deal with, but we’re going to give you some guidelines to help.

Identify their patterns of behavior

The hallmark of this behavior (and what makes it so dangerous) is that it blocks communication and any effort to restore it. Almost all of us have been victims (or may even have been perpetrators), of this kind of behavior at some time or another. However, it can operate in different ways.

In this case, it’s not a pattern of the relationship as such, but an anecdotal framework. In all relationships, there are disagreements and misunderstandings. It may be that some intense argument has caused your partner to move away, to recover or protect themselves. In these cases, there’s an added element of surprise as it’s not a frequent behavior of theirs.

This kind of behavior is a response to the emotional intensity of the moment, so isn’t necessarily an alarm signal. It’s usually due to an argument that’s merely spiraled out of control. As a matter of fact, in the long run, it could even be positive. In any case, once calm has returned, you must talk to each other about what happened.

Nevertheless, since the most difficult time has passed, it may be tempting to leave things as they are and move on, but that can backfire. It’s best to take the time to calmly talk about what happened. Thus, the next time an argument becomes too intense, instead of your partner giving you the silent treatment as a way to escape, you’ll both understand that neither of you really wants to punish the other.

2. When all arguments end in silence

The situation becomes a problem when your partner ignores you to escape from the conflict. Thus, in each argument or disagreement, they simply block any communication with you and stop responding to you. Perhaps, in the past, it’s brought an end to your arguments, so they now use it with increasing frequency.

In order not to reach this point, it’s important not to leave any arguments unresolved, as we mentioned earlier. However, if it’s already a consolidated pattern of behavior, to reverse it, you must strengthen the communication between you. You need to both recognize your responsibility in the disagreements between you and avoid the bad habit of attributing responsibility to each other. In addition, you must agree that neither of you should ignore the other.

You should come to certain agreements. For example, you might tell your partner “If you’re so angry that you don’t want to talk to me, you can tell me and I promise to give you the space to calm down.” The idea is not to let emotions like anger mark the way you communicate with each other.

3. When the silent treatment becomes a form of manipulation

This is a problem on a larger scale. It happens when your partner intentionally ignores you as a way of manipulating you. It’s no longer an emotional response, but a planned and voluntary action. It might happen because they’ve learned, in your current relationship or a previous one, that by being silent they can obtain reinforcement. For example, by getting your attention.

It’s important to recognize when this happens because you’ll find they’ll resort to it whenever they see fit and will use it to manipulate you making you feel guilty and uncomfortable. This is really dangerous because it’s an insidious strategy that can act in a hidden way. In effect, you don’t realize that you’re being manipulated, and you end up giving in to your partner’s wishes. It can even affect your subsequent relationships.

Successful communication can help your partner recognize that they’re using the silent treatment to get what they want and to desist from using it. However, you should keep in mind that, since it’s a strategy that they use voluntarily, they may not want to stop doing it. Alternatively, they may even pretend to change as part of their manipulation. If this is the case, the healthiest thing may be to step aside.

What to do when they give you the silent treatment

Now we’ve reviewed the possible patterns of behavior in which silent treatment may occur, we’re going to give you some tips on how to deal with it. Usually, when it happens, emotions are altered. That’s why it’s important to internalize these guidelines and know how to use them at the right time.

You’ll see progress if you use these tips. That said, if things don’t improve, you can always seek the help of a therapist as a couple. They’ll help you build new and better ways of communicating, and good communication is always key to the success of any relationship.

The post How to Deal With a Partner Who Gives You the Silent Treatment appeared first on Exploring your mind.