Dead Poets Society, is a 1989 American dramatic film, considered to be a movie classic. Starring Robin Williams, and directed by Peter Weir, the film was a critical and box office success.

The film has a rating of 8.1/10 on IMDb. Its popularity led to the publication of Dead Poets Society by writer Nancy H. Kleinbaum that same year, a novel based on Tom Schulman’s original screenplay for the feature film.

Ever since its release, experts have been quick to point out the variety of lessons the movie teaches its viewers. Even today, researchers remain interested in it.  In fact, it’s one of the most important feature films of recent years.

We leave you with a selection of the best quotes from The Dead Poets Club.

1. “You must strive to find your own voice because the longer you wait to begin, the less likely you are going to find it all”.

Many people look forward to a moment of inspiration. However, there’s not really any such thing when it comes to creative activities. In fact, inspiration tends to arrive when you’re in the middle of doing something else.

2. “No matter what anybody tells you, words and ideas can change the world”.

Throughout history, books have been banned for the ideas contained in their pages. Indeed, in the hands of an intelligent person, a good book becomes a sharp tool.

After all, every work must be considered by every reader.

4. “But only in their dreams can men be truly free. ‘Twas always thus, and always thus will be”.

Many fans of Dead Poets Society will identify with these words.

5. “Sucking the marrow out of life doesn’t mean choking on the bone”.

A timely metaphor, which can be taken as a life lesson.

6. “And medicine, law, business, engineering, these are noble pursuits and necessary to sustain life. But poetry, beauty, romance, love, these are what we stay alive for”.

This is the core idea that’s transmitted throughout the whole movie so we couldn’t leave this quote out.

7. “I stand upon my desk to remind myself that we must constantly look at things in a different way”.

These words come from an epic scene that’s also been parodied in different movies and series.

Horace’s Latin aphorism is another of the movie’s teachings.

9. “You must trust that your beliefs are unique, your own, even though others may think them good or unpopular…”.

In fact, what makes you unique will generally appear strange and unpopular to others. After all, those that stray from the herd are always viewed with suspicion.

10. “College will probably destroy your love for poetry. Hours of boring analysis, dissection, and criticism will see to that. College will also expose you to all manner of literature – much of it transcendent works of magic that you must devour; some of it utter dreck that you must avoid like the plague”.

The movie criticizes a certain teaching style and these words summarize part of that criticism. All of those who’ve seen the movie will certainly remember them.

It works according to the context. Some situations demand one kind of behavior and others another.

12. “How do we strip ourselves of prejudices, habits, influences? The answer, my dear lads, is that we must constantly endeavor to find a new point of view”.

This isn’t always easy, especially when you’ve been molded for years to only look in one direction.

13. “Truth is like a blanket that always leaves your feet cold. You push at it, stretch it, it will never be enough”.

A curious metaphor to understand how elusive the truth can be. It’s one of the most popular quotes from Dead Poets Society.

14. “You can’t expect everybody to think about you all the time”.

In fact, for most of the time, people aren’t thinking about you.

Passion drives many people, whether they be viewers or actors.

16. “Teaching is seeing the world. The new world. Seeing a student like you take root, ready to flower and bloom any day”.

These words reflect the meaning of teaching.

17. “How difficult it is for any of us to hear our own voice or maintain our own beliefs in the presence of others”.

Most of the time we’re content to conform to the ideas shared by our own social circle.

18. “You see poetry can come from anything with the stuff of revelation in it. Just don’t let your poems be ordinary”.

Viewers of Dead Poets Society who write poetry will have taken note of these words.

19. “This is a battle, a war, and the casualties could be your hearts and souls”.

Those who approach any kind of artistic activity run this risk.

20. “Show me the heart unfettered by foolish dreams, and I’ll show you a happy man”.

The gap between dreams and reality can be an abyss. Often, choosing to stay in one place or another determines your level of satisfaction.

So much so, that you often do and say things with the aim of being accepted by others.

Can you honestly say that you also always do what you want to do?

Tom Schulman, the film’s screenwriter, based much of the story on his own personal experiences.

23. “Because, believe it or not, each and every one of us in this room is one day going to stop breathing, turn cold, and die”.

A dose of reality that we should all regularly remember.

24. “Just when you think you know something, you have to look at it another way. Even though it may seem silly or wrong, you must try”.

You realize that the certainty with which you thought you knew something has gradually begun to fade.

Another of John Keating’s quotes that represents the overarching theme of the whole movie.

26. “Oh to struggle against great odds. To meet enemies undaunted”.

Adversity will always find a way to make an appearance, and the only way to face it is with determination.

27. “Tomorrow will be dying. Gather ye rosebuds while ye may’.

Because after a few days, even the most beautiful flower is bound to wither.

28. “I thought the purpose of education was to learn to think for yourself”.

Ultimately, this is, indeed, the true purpose of education.

29. “Have no fear, you will learn what this school wants you to learn in my class; however, if I do my job properly, you will also learn a great deal more”.

A good teacher is one who doesn’t only limit themselves to what they’re meant to teach.

30. “You take a big risk by encouraging them to be artists, John. When they realize they’re not Rembrandts, Shakespeares or Mozarts, they’ll hate you for it”.

Young people who explore any creative activity do so to achieve their idols’ achievements. Passion rules motivation.

31. “Language was invented for one reason, boys – to woo women, and, in that endeavor, laziness won’t do”.

Another of the short quotes from Dead Poets Society that all lovers of this movie will remember.

32. “You are souls at a critical juncture. Either you will succumb to the will of academic hoi polloi and the fruit will die on the vine – or you will triumph as individuals”.

Although the film can be watched at any age, as you’ve probably noticed from these quotes, it tends to have a greater impact on the young.

33. “So if you want to raise a confirmed atheist… give him a strict religious upbringing. Works every time”.

We end this selection of phrases from Dead Poets Society with another direct criticism of orthodox education.

What do you think of this list of quotes? Hopefully, they transported you to some of the best scenes in the movie. You can always relive them by watching the movie and reading the novel from the original script. 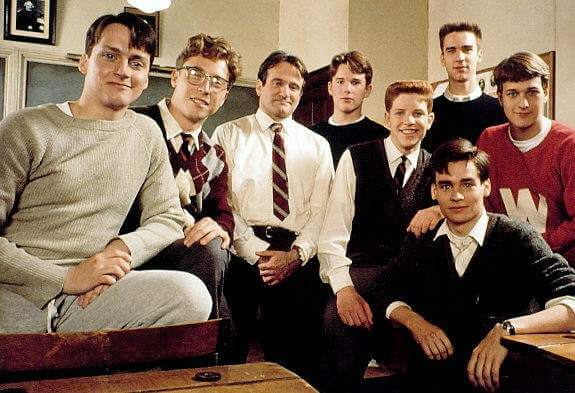 Carpe Diem: ‘The Dead Poets Society’
Who can assure you that tomorrow will dawn again? Given that we live immersed in a universe of enormous proportions, full of chaos and entropy… Read more »

The post 33 of the Best Quotes from Dead Poets Society appeared first on Exploring your mind.

How to Emotionally Free Yourself From Your Parents