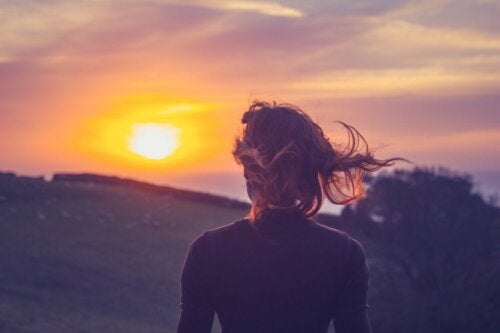 Have you ever heard about existential intelligence? As a matter of fact, it’s one of the great unknowns. That’s because, historically, definitions of intelligence didn’t include it.

According to the Oxford Dictionary, intelligence is “the ability to learn, understand, and think in a logical way about things”. However, for psychology to establish a definition of this construct, it’s been a rather more complex matter.

In this sense, depending on the historical context and the author, the notion of intelligence has acquired different nuances, to the point that, today, there are a variety of definitions. Next, we’ll take a look at one of the perspectives: that of Howard Gardner.

“It’s not how smart you are that matters, what really counts is how you are.”

For many years, intelligence was viewed as unifactorial. To measure it, a reductionist indicator, the intelligence quotient, became extremely popular. Although it was considered that this version of intelligence could be obtained by following different paths, most of the measuring methods were reductionist or biased in their weight toward what were considered to be logical abilities.

Eventually, certain authors opted for a richer and more inclusive concept of intelligence. Some examples were:

Howard Gardner is a renowned psychologist who’s worked for years at Harvard University (USA). His work has given rise to different models of intelligence. In fact, he’s changed the way of seeing this construct, influencing the educational, social, and psychological fields.

Gardner argues that a person’s intelligence can’t be represented by a number, no matter how standardized the measuring instruments may be. He originally divided this construct into eight types of intelligence, namely: linguistic-verbal, logical-mathematical, visual-spatial, musical- rhythmic and harmonic, bodily-kinesthetic, intrapersonal, interpersonal, and naturalistic.

However, where did existential intelligence fit into the equation?

Existential intelligence refers to the cognitive capacity we have to pose and reflect on major human questions, such as:

These are existential questions that most of us ponder at some point, some more, some less. As with the other intelligences, some of us develop it more than others.

To better understand this type of intelligence, here are its main characteristics:

This type of intelligence can be evidenced in everyday life by the following actions:

As we mentioned earlier, Gardner only raised the possibility that this intelligence existed, as he wasn’t sure that there was a neurological correlation. In fact, he remains doubtful. However, he claims that he receives messages from various authors confirming its existence and linking it with spiritual intelligence.

In his book, Intelligence Reframed: Multiple Intelligences for the 21st Century, he argues that the definition of intelligence should be broadened, and gives practical advice on its pedagogical application.

In fact, on his blog, Howard Gardner (2020), alludes to the Covid-19 pandemic. He mentions that our routines were interrupted and the need arose to protect ourselves and others. This has given us more time to think and question ourselves about life.

These dynamics that originated after Covid-19 aren’t exclusive to the history of humanity, but they did make Howard Gardner recover the importance of existential intelligence. Indeed, he began to see it evident in his own life and that of the people close to him.

You don’t have to be a philosopher, theologian, or academic to develop existential intelligence, since we can all acquire it. Here are some ways to do it:

Finally, this type of intelligence can help you feel more connected, both with yourself and others. This will undoubtedly increase your well-being. So what are you waiting for? Start developing it today.

Five Characteristics of People With High Existential Intelligence
People with high existential intelligence go beyond the senses and the material world. Find out what they’re like and how they think. Read more »