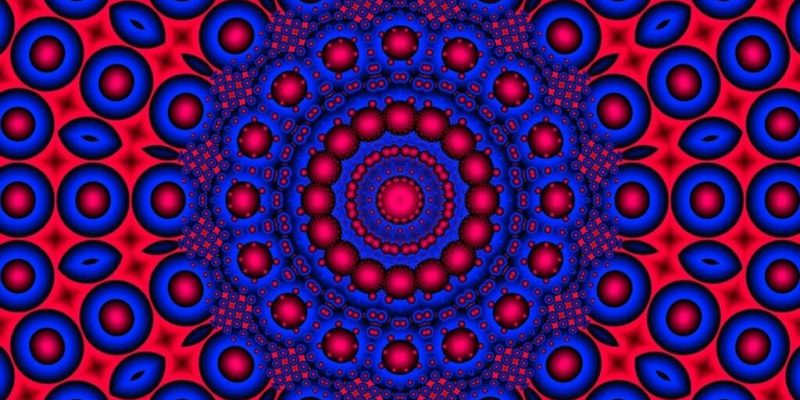 Chromostereopsis is a visual illusion in which we experience a sudden sensation of depth when the colors red and blue combine. It’s one of the most fascinating optical phenomena. Furthermore, we witness its impact daily on the screens of our electronic devices.

In fact, it’s been discovered that, with the use of cell phones and computers, the illusion of depth is even more intense. You can check it by locking yourself in a dark room and looking at an image on your cell phone. Turn up the brightness and you’ll perceive a false movement of the image.

Your brain tricks you (it does this many times) making you believe that a simple drawing has suddenly acquired 3D characteristics. This chromatic aberration is the result of the differential refraction of light relative to its wavelength. Interestingly, people have known about it since ancient times.

Indeed, many stained glass windows in the most ancient cathedrals tried combining certain colors to create this sensation, a unique -and supernatural- experience.

When red and blue are seen side by side in a dark environment, you get the feeling that the red is floating due to the way it stands out against the blue.

A fascinating book about the universe of color, its nature, and its effects is Zur Farbenlehre ( Theory of Colors ) by Johann Wolfgang von Goethe. It was written in 1810. Goethe, the famous German poet, playwright, and naturalist had already realized that blue is a color that recedes and red is a color that stands out. Moreover, together they seem to ‘pierce’ the organ of sight.

Indeed, something happens when these two colors are combined. This has been known by great artists since ancient times. In fact, many stained glass windows and also paintings combine red and blue to generate depth and movement at the same time.

It was in 1860 when the first scientific explanation for the phenomenon of chromostereopsis was put forward. Cornelius Donders, a renowned Dutch ophthalmologist, suggested that when the retina captures the color red, it needs more time to accommodate and process it. If it appears next to blue, the blue will stay in the background, while the red hue will be in front.

Nowadays, there are many more theories that explain this unique phenomenon that, in reality, is present in more areas than you might think.

The secret lies in the fovea

The phenomenon of chromostereopsis wouldn’t be possible without the fovea. This is an area of the retina where light rays are focused and you process colors. This part of the eye is located in the macula lutea, and due to its position/orientation in both eyes, it doesn’t capture the entire range of colors with the same accuracy.

Blue and red are at opposite ends of the light spectrum. This causes each wavelength to be focused differently. Therefore, red always takes longer to process, and will always be in front. The blue will be behind, giving an optical phenomenon of depth.

Interestingly, some people are ‘blind’ to the phenomenon of chromostereopsis. The mechanisms of why this happens are unclear. There are also many people who don’t capture a good part of the visual illusion. Nevertheless, this doesn’t affect their lives. In fact, they’re often not even aware that they possess this unique anomaly.

Chromostereopsis is part of the natural and digital world

Studies conducted at the University of Latvia, reveal how the phenomenon of chromostereopsis is common in digital media. What’s more, the light from cell phones and computers greatly intensifies the perceptual experience. The designers and large technology companies are fully aware of this fact and try to take advantage of it.

Think for a moment about all the platforms and apps that combine red and blue. For instance, the world of video games uses this optical effect constantly, as well as in certain scenarios in television programs. Furthermore, these two shades are continually used in advertising.

On the other hand, it’s fascinating to learn that chromostereopsis is a resource that biology has integrated into the animal world. Certain butterflies have developed red circle patterns on their wings as a defense mechanism against predators. They suggest the shape of an eye that stands out thanks to its hue. This keeps potential enemies away.

Chromosteropsis is a kind of chromatic aberration or optical phenomenon with great impact that’s part of daily life, in natural, technological, and even artistic spheres. If you’re one of those who can perceive it, enjoy it. No doubt you’ll now be more aware of how frequently these two shades are used together.

The Phi Phenomenon: The Optical Illusion Your Brain Creates
The phi phenomenon (φ) was a key concept to Gestalt. This optical illusion makes us believe that fixed images are moving. Read more »

The post Chromostereopsis: A Fascinating Visual Illusion appeared first on Exploring your mind.