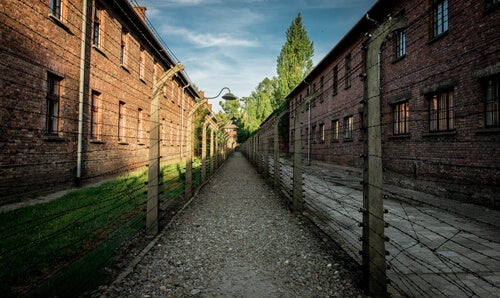 Edith Eger owes a good part of her fame to her book, Dancing with the Enemy, published in 2017. In it, she narrates the battle she had to wage, first to survive the Nazi concentration camps and then to manage her memories in such a way that they didn’t destroy her sanity.

In fact, it was the struggle to stop being a victim of this tragedy that led her to become a psychologist specializing in post-traumatic stress disorder. Indeed, no one better understands the weight of a traumatic experience in life than she.

As part of her healing process, Edith Eger wrote this book which made her famous. Today, she’s convinced that tragic experiences almost always have an influence on the present. However, she claims it’s within our power to build stories with these kinds of memories that don’t prevent us from continuing to live. In fact, we should stop carrying our wounds around with us, manifested either as shame or excuses.

“No one can make you a victim but you. We become victims not because of what happens to us but when we choose to hold onto our victimization.”

The life of Edith Eger

Edith Eger was born in Košice, a town that today belongs to Hungary, but that, when she was born, belonged to Czechoslovakia. Her parents, Lajos and Ilona, were Jewish. Her two older sisters, Clara and Magda, were talented musicians. In fact, Edith has confessed that she felt inferior to them for a long time.

From a very young age, she enjoyed dance and discovered that only by dancing did she feel herself. She also practiced gymnastics and was selected to be part of the Olympic team that would represent her country. Nevertheless, in 1942, several anti-Jewish laws were put into place and she was removed from the group. From then on, her family was persecuted.

Her older sister, Clara, was hidden by her music teacher. Meanwhile, the rest of the family was sent to a ghetto. They had to live in a brick factory together with 12,000 other people. A short time later, she, her mother, and her sister Magda were sent to the Auschwitz concentration camp.

When they arrived at the concentration camp, the young women were separated from their mother, who died shortly afterward in a gas chamber. That same night, the famous Dr. Mengele asked Edith Eger to dance for him.

In anguish, she remembered a phrase that her mother always repeated to her: “Just remember, no one can take away from you what you’ve put in your mind”. Those words allowed her to gracefully dance the Blue Danube, in homage to her mother. At the end of the dance, the Nazis gave her a loaf of bread as compensation. She shared her food with the other young women in the barracks where they slept.

She and her sister were sent to several concentration camps. Edith was also sent on one of the famous death marches. In one of them, she was so exhausted and sick, that she passed out. One of the young women who was also marching recognized her. She, with several other companions, joined together in carrying Edith to their final destination.

Finally, they arrived at the Mauthausen camp. Edith and her sister were so hungry they were eating grass.  She had a broken back, typhoid, pneumonia, pleurisy, and weighed 70 pounds.

In 1945, the camp was liberated by American soldiers. Edith’s condition was so serious that she was put amongst a pile of corpses in a field. However, a soldier noticed her hand moving. He rescued her and got her medical attention. In fact, he saved her life. She then went to Czechoslovakia, from where she flew to the United States.

At first, she chose to hide her story. It was only by chance that she was approached by an acquaintance one afternoon who gave her a book: Man’s Search for Meaning, by Viktor Frankl. She refused to read it because she didn’t want to risk reopening her wounds. However, curiosity eventually overcame her. When she finished the book, she searched for the author and, after long conversations, they cemented what became a beautiful friendship.

Her experience acted as a stimulus for Edith to start studying psychology. In fact, she obtained a doctorate. She was keen to be able to help others, especially those, who like her, had gone through traumatic experiences.

Her most recent work is The Gift: 12 Lessons to Save Your Life which was published in 2020. Today, she’s 94 years old and claims that she’s had an extremely full life.

A Fantastic Love Story Amidst the Horrors of Auschwitz
This is a fantastic love story from Auschwitz. It only became known a long time after it happened. However, the lovers remembered it forever. Read more »

The post Edith Eger: The Story of a Survivor appeared first on Exploring your mind.

How to Overcome a Distorted Body Image