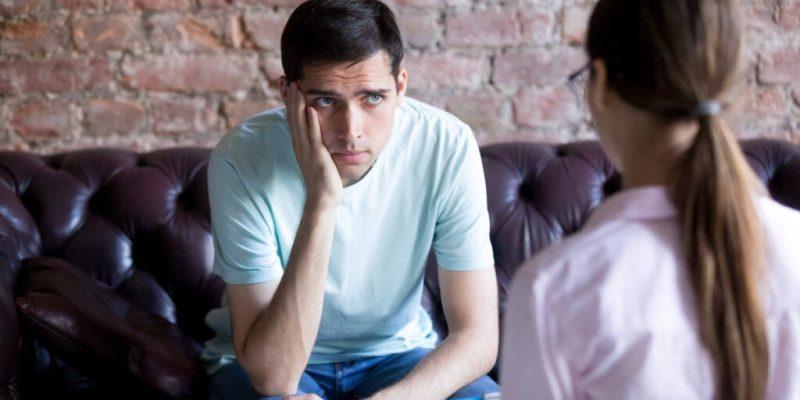 Sexual abuse in therapy is surrounded by a good deal of silence. In fact, therapists are taught not to press patients for information or ask them questions that may be too painful. However, this strategy, while respectful, doesn’t seem to be particularly effective for those who haven’t overcome childhood sexual abuse.

Therapy should try to unearth the taboo and trauma of sexual abuse when it torments the patient. In addition, trauma doesn’t only manifest itself in the form of nightmares or recurrent memories but can do so in many ways. Therefore, professionals often have to be enterprising in order to detect it.

The patient shouldn’t have to remember specific aspects and unnecessary details of the abuse. Indeed, simply having suffered sexual abuse often causes sufferers to feel guilt and shame. Therefore, they want to avoid telling their story and returning to the experience. They want to avoid pain, not go through it again.

The silence of sexual abuse in therapy

Sexual abuse and rape are taboo even among mental health professionals. Nevertheless, they’re extremely common occurrences in our society. Sexual abuse isn’t linked to class, ethnicity, age, deprivation, gender, or sexuality: it knows no boundaries and anyone can be affected.

Neil Henderson, CEO of Safeline, released some chilling data on sexual abuse figures in the United Kingdom. He claimed that one in five women (5.8 million) and one in six men (4.6 million) in the UK have experienced some form of sexual assault since the age of 16. Furthermore, it’s estimated that one in ten children in the UK have been sexually abused.

In addition, these statistics underestimate the true scope of the problem. Henderson claims that only one in six victims ever reveal or report crimes of sexual violence, due to the ‘fear of not being believed’ or feelings of ’embarrassment’ and ‘humiliation’. 85 percent of victims won’t report if they’ve been sexually abused or raped, and only 1.7 percent of 16 percent of rapes are prosecuted.

Why is so little reported? The answer has a lot to do with ‘not being believed’ and the subject’s stigma.

It’s an intensely personal subject and not something people want to talk about. Therefore, mental health workers must encourage (without coercing) people to speak up. They must raise awareness so that sufferers know that it’s not their fault and that they have someone with whom they can discuss the matter in confidence.

The effects of sexual violence can be devastating and long-lasting, affecting not only the victim, but also family and friends, as well as the community at large. In fact, many of Neil Henderson’s patients suffer from depression, post-traumatic stress disorder, anxiety, isolation, eating disorders, drug and alcohol abuse, self-harm, and suicidal feelings.

For example, 15 percent of all suicides and 40 percent of all homeless youth are attributed to sexual violence. Without valid professional and personal support, victims are four times more likely to be re-victimized.

Dr. Marianne Torp Stensvehagen conducted in-depth interviews with ten abuse victims and had 57 others respond to a questionnaire. Few have investigated this form of everyday stress in people who’ve experienced sexual abuse, but she explored the topic in her thesis.

We all experience stress in daily life. However, suffering from sexual abuse translates into a significant added difficulty in coping with stress. In fact, the researcher found a strong connection between everyday stress and trauma-related symptoms.

Her study further indicated that the intensity of PTSD symptoms among severely sexually abused women was related to a high degree of perceived daily annoyances, a low amount of daily positive stimuli, the use of maladaptive coping strategies, and a low level of emotional stability.

The results on the annoyance, improvement, and coping scales are potentially interesting from an interventionist point of view. Aversive life events, such as sexual abuse, may be out of control for the woman who suffers them. This is due to them being in an obviously disadvantaged position with respect to their aggressor. However, the way they evaluate and cope with everyday events can be improved with interventions aimed at survivors.

Daily and prolonged stress is camouflaged with other psychological problems

For women who’ve experienced sexual abuse, the situations in which they recall this fact are many and varied.

“Abuse affects the entire daily life of those I have spoken with. In the interviews, it was shown that many of the events that most experience as normal, such as taking the bus or going to the store, some of these women experience as unbearable stress” says Torp Stensvehagen.

For example, the fear of recognizing their abuser’s perfume or dialect becomes intolerable. Furthermore, many people with a history of past sexual abuse want to isolate themselves after the event for a long time. That’s because they only experienced guilt and shame after the abuse.

Gradually, over time, those feelings settle into the body. Consequently, there may be many physical ailments and behaviors for which no explanation can be found, but they’re there. It means that many people are excluded from normal everyday life, education, and professional life. They live their suffering in complete solitude and without professional help.

The study found that women who had symptoms of PTSD reported more everyday stress, fewer ordinary pleasures, little respite in their daily lives, and more use of inappropriate coping strategies.

Therefore, what if, by asking the patient if they’ve suffered abuse doors are opened for them to a new beginning? They always have the option not to tell, but being given the option is perhaps what they need.

The great therapeutic effects of deciding to speak

Mental health professionals have a duty to help prevent the long-term aversive consequences of a traumatic event. This means they must be aware of the signs and symptoms commonly experienced by survivors of sexual abuse. Nevertheless, the subject is difficult to talk about and many therapists might be afraid of saying the wrong thing or asking the wrong questions.

Trauma training gives therapists the opportunity to educate themselves and thus help patients. In turn, physical and emotional stress-related problems, symptoms, and possible illnesses can be prevented. With trauma training, the professional becomes more confident in asking questions about the abuse. Accordingly, patients recognize they’re all part of the routine and don’t feel bad about answering them. Therefore, more incidences of abuse can be uncovered.

It’s extremely important to discover sexual abuse and promote the patient’s expression of what happened to them when they’re obviously suffering. It means they can be helped as soon as possible. In the long run, this also means reduced stress and improved coping strategies, for which patients will be extremely grateful.

How Can We Help Sexual Abuse Victims?
The La Manada case shed some light a reality that we’d forgotten about for a while: how difficult it is for society to understand sexual abuse victims. Read more »

The post Overcoming the Silence of Sexual Abuse in Therapy appeared first on Exploring your mind.