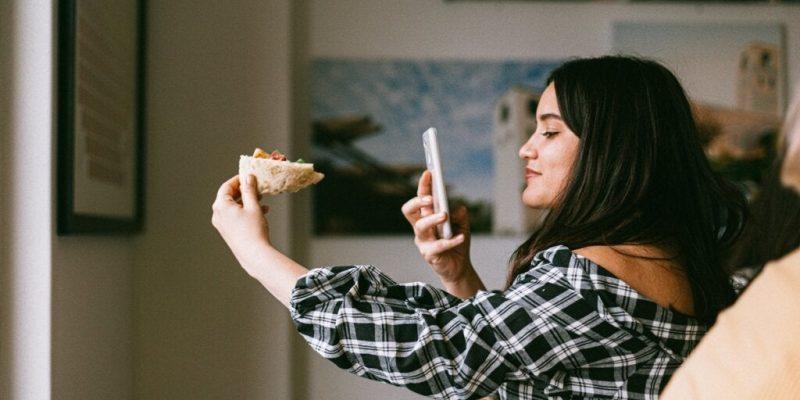 Food influencers are changing the eating habits of many people. This may sound like a joke, but it’s a fact that isn’t talked about nearly enough. Indeed, food influencers offer us delicious recipes, some healthy and some not so, that immediately capture our attention.

Fashions in terms of food have always been around. They generally come from magazines, TV shows, and Internet forums. However, Instagram is now an appetizing window through which we’re able to view appealing and delicious recipes. Just seeing them can activate our gastric juices. For instance, sauces, sandwiches, ice cream, cakes, salads of many colors and flavors…the list is endless.

Social media is a scenario where the visual and the social are combined, thus generating a great impact. What we see influences us and what others do often determines us. This means that our diets may also be mediated by the digital universe.

We eat with our eyes. What we see immediately attracts us. This is a weapon used by social media.

How food influencers influence us

In today’s world, there’s an unwritten rule that, before we start to eat what we have on your plate, we must publish it online. Indeed, food has become a regular and recurring content on social media. We don’t only find photos of landscapes, clothes, and celebrities talking about their amazing lives, but what we eat also attracts likes.

Moreover, when we scroll between the various posts on Instagram, it’s really easy to stop at a photo that contains an appetizing dish. Neither the smell nor the taste reaches us, but the presentation alone is a feast for our brains. This is well known to food influencers, who’ve discovered a real gold mine in the field of food.

The oozing protein and visual stimulation

As a rule, the images that generate the most desire and attraction are those relating to less healthy foods. Furthermore, sooner or later, many users who follow these accounts end up preparing what they see. Therefore, the eating habits of a large part of the population are changing due to social media. That’s because we want to put what we see into our mouths.

Seeing images of succulent and high-fat foods always attracts our attention. Fast or junk food is the one that most attracts us and awakens our desire to eat.

Food influencers know that the dishes they prepare shouldn’t only arouse hunger in those who see them. Food also generates emotions. Seeing a cake, an ice cream, or a pizza full of cheese stimulates our dopamine centers. We feel attraction, desire, and happiness when we see appetizing food.

Ethan Pancer, a professor of psychology, and his colleagues from the University of Saint Mary, Halifax (Canada) conducted research that claimed that fast food is the one that most attracts us. They claim the reason for this is that humans are biologically prepared to look for caloric foods. Therefore, the more fat it has, the more seductive it appears.

For better or worse, food influencers mediate the eating style of many people. Obviously, many of them may be nutritionists and provide guidelines that are both healthy and necessary. In these cases, well-being and pleasure in food are not at odds. On the other hand, there are also gurus who may be putting their followers in serious danger.

The main problems in the rise of social media as a culinary reference are the following:

Adolescents are the ones who are most subject to the dietary guidelines that are suggested to them on social media.

We must remember that we’re currently experiencing a real epidemic of eating behavior disorders among our young people. This is a serious problem and one that’s simply not discussed enough. As a matter of fact, a study by Jaime E Sidani, Ariel Shensa, and Beth Hoffman was published in the Journal of the Academy of Nutrition and Dietetics, on the subject of the association between social media use and eating concerns in young people.

This research claimed that the etiology of eating disorders is multifactorial, but social media is an extremely significant variable. Therefore, what young people see in their digital universes mediates their mental health. The way they interpret it, how exposed they are, and their own psychological vulnerability influence the appearance of problems such as anorexia, bulimia, etc.

We need food influencers who are healthy references for our young people. We require public figures and accounts that create appropriate and enriching content for everyone, but especially for our teens. Because if what they see on social media is what they end up wanting or imitating, we must ensure that what they see represents good health and well-being.

The post How Food Influencers Affect The Way We Eat appeared first on Exploring your mind.