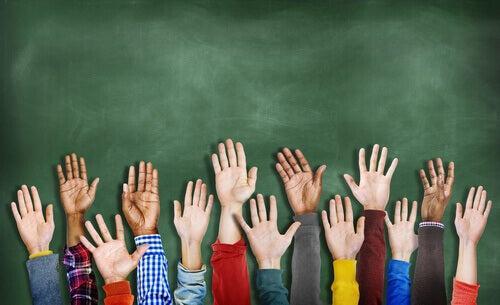 What’s racialism? How is this concept related to racism?

As human beings, we’re social animals that live in constant interaction. As a result of this interaction, human relationships arise in which the concept of group and identity predominates. This creates a situation in which we observe how we build our identity based on a difference: the perception of otherness.

Rather arrogantly, we tend to refer to the perception of ‘us’ versus the ‘other’. When we study this phenomenon, we find ourselves faced with social concepts such as racism and racialism.

In this article, we’ll define racialism, in order to understand and identify it. In addition, we’ll take a look at the literature that gave rise to this phenomenon.

Racialism can be understood as ‘scientific racism’. It’s an idea that was first developed in the mid-eighteenth century. It’s based on the existence and behavior of different races.

Thus, racialism is based on the scientific defense of the existence of human races. This comes from the idea of phenotypic differences between populations that develop in different environments and have evolved in different ways.

Unlike racism or supremacism, racialism doesn’t imply the idea of the superiority of some races over others. However, it’s usually accompanied by proposals for racial segregation or separatism. Therefore, although there are differences between racism and racialism, the two concepts usually go hand in hand. In fact, we usually tend to see how one justifies the other.

Today, we know that races are a social categorization. In other words, there’s no scientific basis for these theories. Nonetheless, they did receive great support from the scientific community up until World War II. Indeed, they’re fundamental theories for understanding scientific thought and international relations between the 18th and 20th centuries.

According to the philosopher and historian Tvetan Todorov, who worked on the subject of alterity, the main postulates of scientific racism or racialist theory are:

Essay on the inequality of human races

Published in 1853 and 1855 by the French writer Joseph Arthur de Gobineau, this book is considered to be the initial work of racialist philosophy.

Gobineau was an aristocrat and a diplomat. He was convinced that the ethnic question explained the problems of history. He believed that the diversity of races that intervene in the formation of a nation is enough to explain the destinies of peoples.

Gobineau recognized the existence of strong races and weak races yet paid more attention to the former. He argued that a founding race of civilization flourishes while keeping itself pure and eschewing hybrid contacts. In fact, he claimed its decline begins when elements of inferior races infiltrate it.

Today, we can see that theories of racism were formed in Gobieneau’s texts. For example, we’re able to highlight their influence on:

As you can see, racialism is an attitude based on a way of seeing the world that has many implications in reality. Implications that, unfortunately, almost always are connected with subduing or dominating the weakest.

Ostracism and Social Exclusion
Ostracism and social exclusion are forms of social punishment. They happen due to all sorts of prejudices and to the diversity of beliefs or values. Read more »

The post Racism and Racialism appeared first on Exploring your mind.

Inspired Action: What It Is and How to Implement It