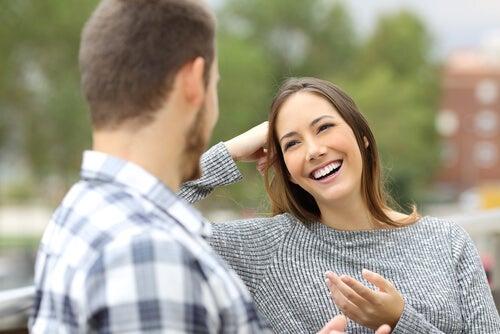 Praising your child can be risky. Indeed, saying things like”You’re so smart!” or “You’re so creative!” while, at times can be helpful, can, at others, be harmful. Why is this?

When your little one performs a feat or demonstrates a social skill, such as putting on their shoes by themselves, you immediately praise them for their achievement. Bravo! They’ve achieved something and you reward them verbally. As a matter of fact, your praise often slips out of your mouth without you even noticing.

Praising your child: A double-edged sword

When you praise your child, they make the action=praise association. For this reason, they’ll most likely repeat their achievement simply to be praised again.

Research is pretty clear that the use of praise only motivates children to receive more praise. Therefore, when praise labels a child (for example, “You’re so smart”), it’s easy for the child to focus only on maintaining this perception over time, instead of being interested in their performance or their process of learning.

The psychologist, Alonso Tapia, claims that only using praise “can be perceived as a form of control, so the interest in the task will decrease”. In other words, you might make your child stop asking questions or minimize their participation. In short, if you try to reinforce your child’s behavior by telling them that they’re extremely smart, you can stop them from displaying intrinsically motivated behaviors.

Therefore, how should you praise your child in order to help them build an effective motivational framework? The following three strategies could provide an answer.

Praise the process, not the person

How you praise your child can affect their thinking and, in turn, their propensity to take on challenges, persevere, and succeed academically. According to research, there are two particular mindsets: fixed and growth.

This difference in thinking was demonstrated with an experiment in which four-year-olds were asked to solve a puzzle. They were given the option of returning to an easy puzzle they’d previously completed or trying a more challenging one.

The children with fixed mindsets decided to remake the easier puzzle, thus asserting their existing abilities. On the other hand, children with a growth mindset wondered why someone would do the same puzzle again if there was the opportunity to solve a new one?

The children with a growth mindset chose to tackle the more difficult puzzles. Indeed, they were inclined to keep testing their abilities, rather than trying to gain confidence by resolving those they’d already outgrown.

Do you want to cultivate a growth mindset in your child?

If so, instead of praising them, praise the process:

Another group of researchers, led by psychologist Wulf-Uwe Meyer, conducted a series of experiments with children under the age of seven, who accepted praise at face value. The researchers verified how children older than 12 years examined words of praise to uncover the truth. In other words, they compared their own perception of the value of their work and that of the praise they received.

The studies of Meyer et al discovered that children who saw a difference between their perception and that of the teacher took the praise as a sign that the teacher thought they lacked ability and needed an extra boost. On the other hand, the study demonstrated that the children viewed praise as more sincere when the teacher also exposed some criticism of the work they’d done.

An impressive body of studies shows that praise can be downright discouraging. In fact, in this respect, seminal research was conducted by Mary Budd Rowe. She demonstrated that a group of elementary school students, who were lavishly praised by teachers, began to answer questions with a more tentative tone (“Is the answer seven?”). Furthermore, when the teacher didn’t agree with them, they withdrew their original idea.

In another study, conducted by Joan Grusec, and Leon Kuczynski children aged eight to nine, who were often lavishly praised, began to act less generously on a day-to-day basis with their peers. In fact, each time children heard “I’m so proud of you for helping or sharing,” they exhibited fewer helping and sharing behaviors. Therefore, the intensity of the collaborative impulse decreased and created the opposite effect to the desired one.

As we’ve seen, children develop tolerance to praise and require ever-increasing doses. Consequently, as soon as parents and teachers take away praise, children might lose interest in the activity.

Indeed, once attention is withdrawn, many children stop practicing the task that had been reinforced with explicit recognition. In a nutshell, their taste for carrying out a certain behavior or for its intrinsic consequences disappears because its appearance is conditioned by the hope of reinforcement. When this disappears, the behavior also vanishes.

Bearing all of this in mind, if you want to be a little more parsimonious with your praise, what should you do instead?

Instead of praising, try to observe and comment. For example, say “You’ve finished your painting!” Such comments acknowledge your child’s effort and encourage them to take pride in their accomplishments. If your child draws a picture, when you say what you think of it, don’t judge them. For example, don’t say “Those clouds are too big!” or “Are you sure you should’ve used so much blue?”

At the end of the day, you want your child to feel encouraged and motivated. You must recognize their triumphs because you’re really proud of them. Changing habits takes a bit of effort, but start by continuing to say “Good job” to your kids while trying to mix it up with some other forms of praise as well.

The Delicate Art of Responding to Praise
Responding elegantly to praise is not an easy art to master. Maybe it’s embarrassing and you downplay it, or you don’t and you come off ungrateful or proud Read more »

The post The Top Three Ways of Praising Your Child appeared first on Exploring your mind.

The Shift: A Movie That Invites Self-Reflection