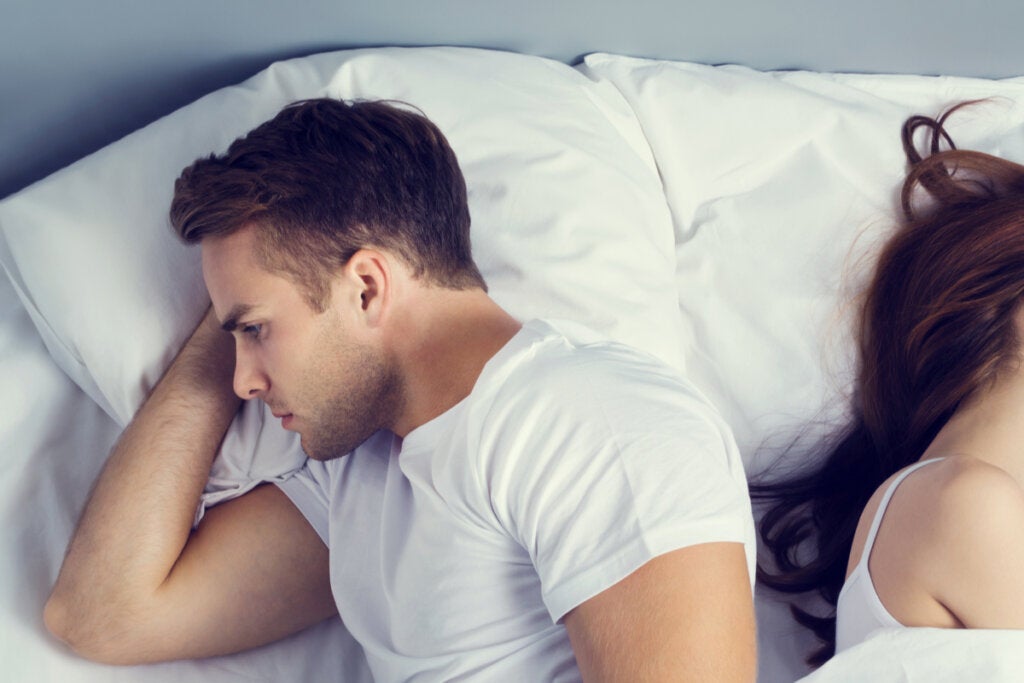 Sexual dysfunctions are alterations in normal sexual behavior. They can affect the different stages of the sexual act. For example, desire, arousal, orgasm, and resolution. Some of these disorders are experienced by both sexes. However,  others are suffered exclusively by women or men. One such instance suffered by men only is delayed ejaculation (also known as anejaculation).

Delayed ejaculation is a dysfunction that affects between four to ten percent of men. It’s diagnosed when a man has difficulty ejaculating after having gone through a normal arousal phase during sexual intercourse. In other words, despite being aroused, ejaculation is delayed or doesn’t occur at all.

The main symptom of delayed ejaculation is the absence or delay of ejaculation on a recurring basis. In some men, ejaculation may occur after 20 or 30 minutes of sexual stimulation. In other cases, it doesn’t happen at all.

The presence of this dysfunction is determined by the anxiety or frustration caused by the delay in ejaculation. For this reason, the sexual act is interrupted. That’s because fatigue, physical irritation, discomfort, or loss of erection prevent it from continuing normally. This generates a stressful situation for both the man and his partner. Furthermore, it may eventually cause other psychological or relationship problems.

To diagnose delayed ejaculation, clinicians carry out both psychological and physical examinations. They also examine the patient’s medical history. They undertake a physical examination to rule out that the fact that the disorder isn’t due to any underlying medical condition. In fact, if this were to be the case, doctors would treat it as a symptom and not as a sexual dysfunction per se.

Behind delayed ejaculation, there may be one or more causes. These are usually grouped into physical, psychological, or behavioral factors.

It’s always important for a doctor to study and rule out whether the condition may be due to one of the following reasons:

Delayed ejaculation has its origins in psychological aspects that interrupt or hinder the normal development of the sexual act. Among the main reasons are the following:

In this category are those behavioral habits that can cause long-term problems of delayed ejaculation. Among them, the following stand out:

Treatment of delayed ejaculation will depend on its cause. If its origin is physical, the doctor will prescribe a pharmacological or other treatment to help alleviate the symptoms of the underlying disease. However, drug treatment is usually not as effective as psychological treatment.

In psychological therapy for delayed ejaculation, therapists usually address three areas. Firstly, aspects of the individual, secondly, aspects regarding the couple’s relationship (if it applies), and, thirdly, sexual therapy exercises.

Among the individual psychological aspects that the therapist addresses, are the beliefs and thoughts causing the anxiety that’s preventing the patient from enjoying normal sexual activity.

In couples therapy, therapists work on how the problem is affecting the couple’s emotional and sexual relationship. For example, there may be difficulties between the couple that are causing the man’s sexual dysfunction.

Finally, therapists might suggest they perform sexual therapy exercises. These aim to decouple the sexual act and reduce attention towards orgasm. In other words, they focus on lengthening the stimulation prior to penetration and ejaculation.

Likewise, there are exercises for approaching ejaculation at the moment of penetration. One such exercise is the “bridge maneuver”.

A problem that can usually be solved

Without a doubt, delayed ejaculation is a sexual dysfunction that can cause a lot of anguish and anxiety. However, if the sufferer seeks psychological help, the chance of treatment being successful is high.

For the most part, premature ejaculation is caused by certain ideas that block the sufferer’s ability to enjoy relaxed, as well as learned behaviors. Fortunately, these aspects can be reversed with the appropriate intervention.

If you have problems of this type, look for proven information and go to a psychology professional who specializes in sex therapy. With a little effort, patience and work, you could soon be back to enjoying yourself exactly the way you want to.

Sexual Behavior According to Science
The perfect duration of penetration? Do people plan sex? Do young people use contraception? We’ll answer these questions and more about sexual behavior. Read more »

Tooth Fairy Traditions Around the World