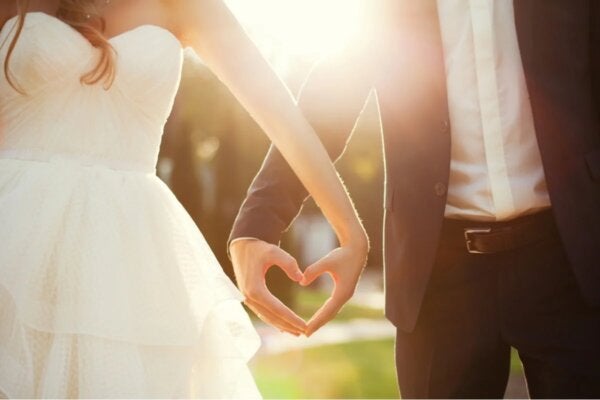 The first curious fact concerns where marriage first became a legal institution. This was in Rome. Males could marry when they were 14 years old and females when they were 12.

As a matter of fact, the whole custom of marriage originated in ancient Rome. Another curious fact from this time is that they believed that a vein on the ring finger went straight to the heart. This belief remained for several centuries.

White dresses for brides appeared in 1840. Up to then, they married in any color. In fact, it was Queen Victoria who started this tradition. She was also the first to use the bridal march.

Here are some more curious facts about marriage.

“A successful marriage requires falling in love many times, always with the same person.”

The history of marriage

One of the most curious facts about marriage is that, for the main part of history, it wasn’t linked with love. In fact, from Roman times, it was an exclusively civil institution for patrimonial reasons. In other words, people married merely to ensure they had economic stability.

This didn’t just happen among the families of the aristocracy but at all levels of society. Marriage was an arrangement between the bride’s father and the groom. They assessed economic and social benefits, not sentimental ones. Divorce was unacceptable in most countries until well into the 20th century.

When the idea of romantic love appeared, the usual places to find partners were balls (for the wealthy) and fairs (for the lower classes). In fact, everyone knew that was where you went to find a partner. Another option was at religious services.

A woman flirting or showing any interest in a man used to be frowned upon. Women were meant to pretend to be uninterested in order to prove they were respectable maidens. However, this didn’t stop a whole language of love from being developed using fans, handkerchiefs, and umbrellas. Each gesture with one of these objects came to mean something between the interested parties.

Many of the curious facts about marriage concern the traditions accompanying the actual wedding. Throughout the world, there are specific ways of expressing the desire for the couple to be happy and to turn their love into a celebration. Let’s look at some of these marriage traditions:

The final curious fact is that the institution of marriage was relatively stable until the 1960s. However, the invention of contraceptives and the establishment of divorce in the United States caused separations to increase by 100 percent between 1966 and 1969. This pattern was subsequently repeated in many countries around the world.

The Myth of Hymen, the Greek God of Marriage
The myth of Hymen, also called Hymenaeus, is one of the most romantic in Greek mythology and is the story of two determined lovers. Read more »

The post Some Curious Facts About Marriage appeared first on Exploring your mind.

Nine Games to Exercise the Mind