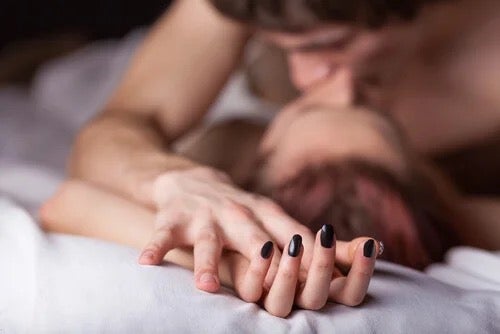 The way you look at someone shows whether you’re interested in them or not. In fact, when you see someone you like, your eyes tend to light up. However, sometimes, in the most intimate of moments, rather than fixing your gaze on the other person, you actually close your eyes. Why does this happen? Why is it so common to have sex with your eyes closed?

When you look at someone, you’re communicating emotionally in one of the most primitive ways known to man. You know that one look can convey more than a hundred words. In fact, looks achieve many things. They can give you away, grant forgiveness, or you can even make suggestions with them.

From an evolutionary standpoint, your eyes and gaze function in more ways than they were originally intended for. Like your airways, for example. They were intended to allow you to breathe. Then, they enabled people to speak. Your eyes were simply intended for you to see. However, they’ve since become one of the most expressive elements of your face.

However, if you can’t see the person you’re with, is it as exciting?

What’s the meaning of having sex with your eyes closed?

You’re living in an era in which sexuality has reached previously unknown levels. Indeed, you tend to see demonstrations of all kinds of sexuality. Furthermore, experts recognize the power that a glance and the act of seeing (or not) can actually have in sexuality.

In fact, it seems that having sex with your eyes closed can actually increase the intensity and enjoyment of the experience. Indeed, many people fantasize about covering the eyes of their sexual partner with a scarf.

Reasons for having sex with your eyes closed

People prefer to have sex with their eyes closed for a number of reasons:

It’s very common for people to close their eyes in a passionate sexual act. However, in a slower and calmer act of lovemaking, the trend is reversed and they exchange glances more often. Why would that be?

There’s a simple answer. Fantasies are an essential part of both romance and sex. However, romantic fantasies have more of a basis in reality. Whereas with sex for sex’s sake, fantasies have no real boundaries. In fact, people are free to experiment in whatever way they choose. Indeed, they can really let their imaginations run wild.

Consequently, when romantic partners gaze into their other’s eyes they’re probably thinking about future plans together and their ongoing romance. In other words, they aren’t really fantasizing as such. In fact, they remain a bit more grounded in reality.

However, when people fantasize with their eyes closed during sex, their imagination goes much further and to more exciting extremes. In addition, some sexologists claim that having sex with your eyes closed increases sexual pleasure and desire. That’s because it stimulates your other senses.

Whether or not you close your eyes during sex is entirely up to you. Simply focus on enjoying the moment. Just make the experience a memorable one and don’t worry about whether your eyes are open or closed.

Sexual Behavior According to Science
The perfect duration of penetration? Do people plan sex? Do young people use contraception? We’ll answer these questions and more about sexual behavior. Read more »

The post Is Having Sex with Your Eyes Closed Significant? appeared first on Exploring your mind.