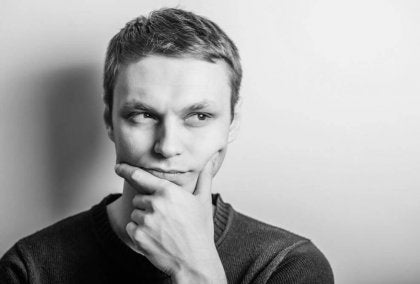 “In the wonderful realm of the mind, I can be free like everyone else.”

Freud represents the peak of psychoanalytic criticism and, at the same time, its decline. However, his psychoanalytic theory has produced both great rejections and debates concerning its validity. Nevertheless, what can’t be criticized is the advances his theory made in the fields of philosophy, psychology, and scientific medicine.

Some call it science and some call it pseudoscience. In fact, Freud inaugurated a line of thought based on the destruction of the concept of the self through the study of the unconscious. It had an essential influence on all the disciplines of the 20th century.

Curiosities of the mind according to Freud

As human beings we all have desires and repressions that we’re forced, in a certain way, to control in the face of society. As a matter of fact, sometimes, we’re not even aware of the fact that many of our more rational acts are directed by our unconscious.

On many occasions, we behave in such a way because it’s acceptable to the culture in which we live. However, this may well not be how we really feel. Therefore, on these occasions, our desires are thwarted because they’re viewed as immoral, illegal, or unworthy.

The curious fact that derives from these ideas concerns how our behavior, in essence, contradicts us. Our real thoughts emerge subliminally in our dreams, fantasies, or slips of the tongue. This leads to the question, why are we so limited by what others think of us?

In 1923, Freud amplified the theory he first proposed in 1915 about the human mind and claimed that it’s divided into three parts. On the one hand, there’s the conscious part of the individual, the “ego”, that we control in a limited way. Then, there’s the “id” which is the unconscious that’s governed by the pleasure principle. Finally, there’s the “superego”, the ethical component of our personality.

The “superego” is made up of the moral norms that we internalize from childhood. It leads to feelings of guilt and morality.

The curious fact here is that his affirmation assumed, for the first time, that madness may be caused by reasons far removed from mental or organic injuries.

When a patient wants to undergo a study of their unconscious for some kind of problem they’re suffering from, the cure lies in language itself. Indeed, language is the place where inner conflict can be recognized. This is because the person is able to talk about any subject without restrictions.

Through language, the patient expresses contents that, for them, are still unconscious. In fact, they don’t recognize them due to their “ego”.

If our internal desires show themselves in the form of dreams, these must be studied. This allows the emergence of traumas and conflicts which can then be resolved. After all, as we know, we are what we dream of and we dream of what we are.

Role of the psychoanalyst

The psychoanalyst is equipped to psychoanalyze the dreams of their patient. They allow the conscious study of the unconsciousness of the person.

“Would you mind telling your subconscious to calm down?”

” It’s my subconscious. Remember? I can’t control it.”

This is a means of viewing the subject in the way in which they’re configured in their own culture. In effect, it’s feedback. Because each era has its own peculiarities and its ways of being that must be studied by the psychoanalyst. In this way, they understand what the effects are on the patient.

“The symptoms of psychic pathologies take the forms proper to the societies that the subjects inhabit.”

The Oedipus complex is, perhaps, the greatest curiosity of the theory of the unconscious. Freud pointed out in his research that man moves by instincts and one of them is the well-known “killing of the father.” In fact, the figure of the mother becomes the significant and essential one. In fact, one of the wishes of the individual is that she replace the father.

Culture, as we mentioned earlier, plays a strong part in the realization of the “ego”. In this way, it’s in charge of causing the non-realization of the individual’s desire. This tends to lead to morality and religion. Furthermore, repression and the Oedipus complex can become pathological.

Sigmund Freud’s Theory of Personality
Sigmund Freud was always changing his theory of personality. Here we’ll tell you about the 5 different models that work together to make up his one big idea. Read more »

The post Some Curious Facts About Freud’s Theory of the Unconscious appeared first on Exploring your mind.