“He’s a fully-fledged masochist”. That’s what the CIA concluded after commissioning a group of psychologists to conduct a psychological profile of Adolf Hitler. The analysis was more than 1,000 pages long. Although they eventually reduced it to 229. Nevertheless, it was the first attempt in understanding the mind of one of the most devastating characters in modern history.

Several leading figures of the time collaborated in the making of the report. The most significant were Dr. Henry Murray, American psychologist and Harvard professor and university academic Joseph MacCurdy.

Psychoanalyst Walter C. Langer also contributed to the drawing up of the report. In fact, he possessed valuable first-hand data as he’d lived in Germany at the time of Hitler’s uprising. He wrote The Mind of Adolf Hitler: The Secret Wartime Report. In this book, he mentioned some of the psychological traits we talk about in this article.

“From what we know of his psychology, the most likely possibility is that he will commit suicide in the event of defeat. It’s probably true he has an inordinate fear of death, but possibly being a psychopath he would undoubtedly “screw himself up” into the superman character and perform the deed.”

How was Hitler’s psychological profile conducted?

This might well be your first question. Did Adolf Hitler voluntarily undergo interviews, evaluations, and clinical tests in order to carry out the psychological report? The answer, of course, is no.

In fact, it was the Office of Strategic Services, a precursor to the CIA, that undertook this report in 1938. It took them around two years to collect all the data. They arranged all the information and documents in the Hitler Source Book. Of particular note were the first-hand testimonies of figures like:

Hermann Rauschning, a German conservative who worked briefly with Hitler.

Otto Strasser, one of the first members of the Nazi party.

Kurt Lüdecke, another member of the Nazi party. However, he left due to disagreements with Hitler.

While it’s true that none of the psychologists who compiled the report came face to face with Hitler, they certainly had plenty of material to work with. In addition, they were helped by interviews with the people we mentioned above. They also had access to certain audiovisual materials.

In 2005, the authorities declassified the report. Consequently, the work is now available at Cornell University. It’s cataloged under the title Analysis of the Personality of Adolph Hitler: With Predictions of His Future Behavior and Suggestions for Dealing with Him Now and After Germany’s Surrender. The report concluded the following regarding the psychological state of Adolf Hitler:

In the report, Murray, MacCurdy, and Langer specifically mentioned the conditions of schizophrenia, neurosis, and hysteria. They described Hitler as someone incapable of maintaining lasting social relationships. He was a misfit and extremely vengeful. Furthermore, he belittled people and held grudges.

In addition, those who knew him claimed he had a tendency to outbursts of hysterical anger. He was also easily frustrated and took those frustrations out on others.

As a matter of fact, Hitler himself always demonstrated a paranoid faith that he’d been chosen by God to free the German nation of the Jews. Many witnesses claimed that he said he heard voices explaining to him what he should do at any given time. This tends to reinforce the hypothesis of schizophrenia.

The Messiah complex doesn’t appear in any diagnostic manual. However, it describes the kind of behavior where people experience delusional ideas. In fact, Hitler was convinced that Germany was a superior country.

Furthermore, he was obsessed with saving Germany from everything he considered to be harmful.

Adolf Hitler thought that the German people were a superior race. He thought his mission was to lead them in a crusade against the Jews who he considered to be evil incarnate.

Collective narcissism refers to a trait whereby the individual reinforces exaggerated and disproportionate respect for a group to which they belong. This idea is related to the Messiah complex.

Hitler demonstrated an inordinate passion for his own group, to the extent that he wanted to destroy everything that didn’t conform to his ideals.

All the experts who contributed to this report agreed that Hitler had an inferiority complex. In fact, throughout his whole life, he loathed his physical appearance.

He projected his rejection of himself onto others. Indeed, he detested any seemingly weak or fragile people.

Many friends and people close to the dictator spoke of his lack of empathy and masochistic and abusive tendencies in his relationships. His sexuality was always questioned. He also seemed to enjoy rather lurid sexual practices.

In 2003, Theo Dorpat, a psychiatrist from Seattle, published a work entitled Wounded Monster: Hitler’s Path from Trauma to Malevolence. In this book, he spoke of Hitler’s sadomasochistic tendencies and his indifference to human suffering. Dorpat claimed this could be a possible result of childhood trauma. The report speculated that some of Hitler’s paranoid delusions and psychotic episodes could be attributed to amphetamine abuse.

Nurse Renate Heston reported that Hitler was taking amphetamines such as Pervitin, as well as various stimulant drugs.

Hitler had terrific influence over the masses. In much of the audiovisual material, you can see his manipulative power and charisma at work. This could be explained by the way he saw his role in the world and the responsibility he felt fell on his shoulders. As we mentioned earlier, God or the voices that spoke to him, told him to save Germany. That motivation guided him to always show conviction and unswerving solidity in front of his followers.

Hitler suffered from chronic insomnia. When he eventually fell asleep, he suffered terrible nightmares. He also heard voices on the long solitary walks he took.

Many people would like to remove Adolf Hitler completely from our history books. Indeed, it’s hardly surprising when you think of those horrific images of the mass genocide and humanitarian disaster that have a tendency to remain stuck in everyone’s minds to this day. Indeed, even though they didn’t conduct this psychological profile under the proper conditions, we can’t disregard the hypotheses it proposes.

Needless to say, we’ll never know what really went on the mind of this German dictator. However, we do know what he did and we now know what those around him said about him. As a matter of fact, these kinds of investigations will probably never cease. That’s because researchers will continue to search for some kind of explanation for the reasoning behind his terrible actions. 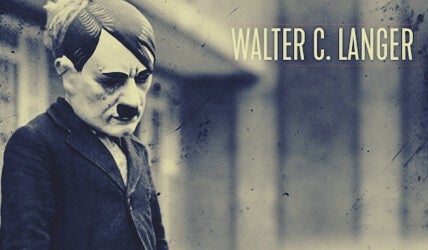 The post The Psychological Profile of Adolf Hitler appeared first on Exploring your mind.

Is it Possible to Dream About the Future?