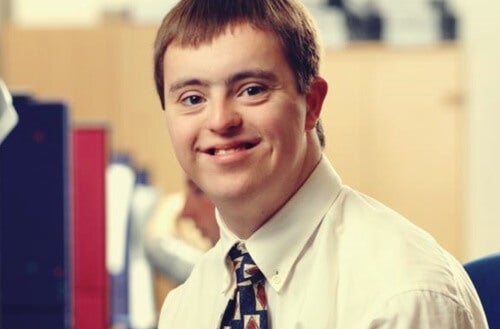 These films about inclusion reflect situations of differently-abled people and their struggle to find a place in society. Thus, these inspiring stories provide a glimpse into the lives of some of them.

These examples are a combination of courage and determination. Stories that follow people who never stop pursuing their goals, despite having a number of reasons not to.

Thus, watching films that reflect learning or developmental difficulties nurtures feelings of inclusion among those of us who might have never come face-to-face with this challenge.

These movies also give those with these issues the opportunity to see characters on screen with an identity of their own who face and overcome significant challenges. Check out the following list of inspiring films.

“Nature is cruel but we don’t have to be.”

This is a biographical film starring Claire Danes in the role of a person on the autism spectrum.

Before enrolling in college, animal husbandry expert Temple Grandin visits a cattle ranch owned by her aunt Ann (Catherine O’Hara), where she demonstrates a great ability for mechanical activities.

Once she starts college, she must confront intellectual challenges. Nevertheless, the social ones are a bit more difficult. Grandin triumphs over prejudice to become an innovator in the field of animal care and an advocate for a more humane initiative.

HBO’s biopic is a reminder that people on the spectrum are individuals just like everyone else.

This is one of the best-known inclusion films. Car dealership executive Charlie Babbitt (Tom Cruise) learns that his estranged father died. He returns to Cincinnati and finds out that he has an autistic older brother named Raymond (Dustin Hoffman).

His father’s $3 million fortune goes to the institution where Raymond lives. Motivated by his father’s money, Charlie takes Raymond out of the facility and brings him back on his road trip to Los Angeles. It’s a journey that’ll change both of their lives.

Under the direction of Barry Levinson, Hoffman and Cruise evoke a good deal of intense emotion. It was quite the revolution back in the day due to its originality.

He was diagnosed with Lou Gehrig’s disease at the age of 21. This terminal disease is also known as amyotrophic lateral sclerosis (ALS). Thus, he gradually lost the use of his limbs.

However, Stephen Hawking went on to become a brilliant and celebrated scientist. This is because his research advanced humanity’s understanding of the universe.

Jamie Foxx won an Oscar for this film. Ray is a biographical film that examines the life of Ray Charles, a singer, songwriter, and musician. Motivated by his mother and driven by his enormous musical talent, he rose from humble beginnings.

Ray Charles grew up on a plantation in Florida and lost his sight at the age of seven due to glaucoma. He soon realized he liked music. He rose through the ranks of the Seattle jazz scene, battling drug addiction and infidelity while traveling. Ray Charles redefined soul music and inspired a generation, always with the support of his wife (played by Kerry Washington).

This movie was the highest-grossing independent film of 2019. It features standout performances by Shia LeBeouf and Zack Gottsagen. The film is a dramatic comedy about friendships, strength, and the pursuit of dreams.

The story follows the adventure of young Zak, who dreams of becoming a professional wrestler while attending the school run by his idol. He runs away from an assisted living facility and takes refuge in a small fishing boat.

Eventually, he strikes up a friendship with the boat’s owner, Tyler (played by Shia LeBeouf), as they make their way downriver.

Zak creates a wrestling character for himself: “the peanut butter falcon”. This is because the pair had been eating a lot of peanut butter, as it was the only affordable grocery item. Furthermore, actor Zack Gottsagen, who has Down syndrome, shines in his portrayal of the young man chasing his dreams.

Adapted from a book of the same name by Jonathan Evison, this movie is a comedy-drama starring Paul Rudd, Craig Roberts, and Selena Gomez. Moreover, it premiered at the 2016 Sundance Film Festival.

It tells the story of Ben, a writer who becomes a personal caregiver after a personal tragedy. He gets a job caring for Trevor, a young boy (played by Craig Roberts) who has Duchenne muscular dystrophy.

Trevor shares his fascination with the peculiarities of American roads with Ben, who suggests taking a trip to visit all of these places. Trevor’s anxiety for adventure and perceived dangers mirror those of his overprotective mother. However, he overcomes them eventually.

This is a post-apocalyptic sci-fi horror film with performances by John Krasinski, Emily Blunt, and Millicent Simmonds.

The movie isn’t specifically about disability. However, it made the list because it features sign language as the main form of communication between the characters in the film.

The plot follows the Abbott family, who search for supplies and live in total silence as they try to survive in a ravaged world dominated by murderous blind aliens who track and kill using their acute hearing.

People with Disabilities: Looking to a More Inclusive Future
People with disabilities don’t need our compassion, they need inclusion. How can we achieve this? Read on and find out more. Read more »

The post Seven Films about Inclusion appeared first on Exploring your mind.

Description and Characteristics of the Babinski Reflex