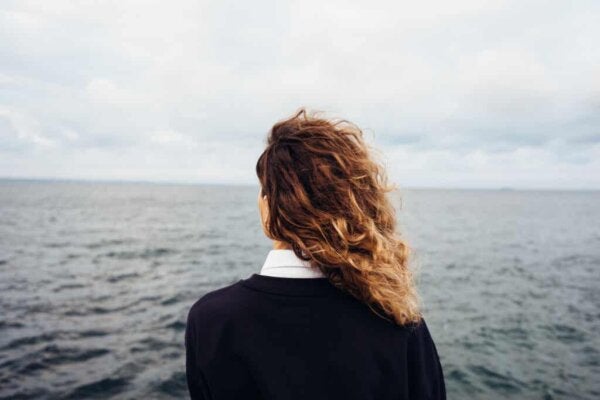 Self-sufficient people are a mixture of healthy self-esteem and independence. They make their own decisions and don’t depend on others. In fact, they aren’t afraid of loneliness. What most defines these people, beyond the aforementioned characteristics, is their freedom of thought.

It’s curious how the first thing that comes to mind when you think of “self-sufficiency” is the image of someone who doesn’t need anyone and can survive on their own. However, this term actually encompasses many psychological constructs. This article will delve deeper into this concept so you can develop it further, set aside stereotypes, and integrate it into your personal growth repertoire.

After all, this concept isn’t synonymous with detachment. It isn’t about becoming a hermit who doesn’t need anything or anyone. In fact, self-sufficiency is the art of believing in yourself.

“I care for myself. The more solitary, the more friendless, the more unsustained I am, the more I will respect myself.”

The five pillars of self-sufficient people

The guru of self-sufficiency is ecologist John Seymour. He started a movement that inspired thousands of people to change their lifestyles during the 60s and 70s. His books The Self-Sufficient Life and How to Live It encouraged people to make revolutionary changes.

A big part of these transformations involved leaving the office or factory life to live in the countryside. This led to the emergence of alternative communities of people leading an environmental movement in the United Kingdom. Thus, the first thing these hundreds of men and women (mostly young people) discovered was that self-sufficiency required a lot of effort.

It wasn’t easy to stay out of the system and live off the land. However, many realized that, while economic self-sufficiency wasn’t viable through that lifestyle, it did help them develop psychological self-sufficiency. In other words, they learned to think for themselves and have a more critical perspective.

Continue reading to discover the other traits of self-sufficient people.

Babies are completely dependent on their parents. This is why it’s often difficult for humans to learn to become independent and fend for themselves emotionally, socially, and financially.

It’s common to feel attached to many of your close figures during a good part of your life. Acquiring full independence in all aspects implies developing healthy self-confidence.

As you discover what you’re capable of, you feel satisfied with who you are due to your potential and worth. All of this threads your self-love, a trait that’s crucial in self-sufficient people.

Self-sufficient people feel solely responsible for their own life

These people are defined by an indisputable foundation: they enjoy being in charge of their own lives. What does this mean? It implies that they don’t allow others to make decisions for them. They don’t depend on what others do, say, or expect of them in order to live their lives.

Moreover, they’re reluctant to meet other people’s expectations. They limit themselves to their own desires, personal goals, and aspirations at every stage of their lives. Likewise, they take responsibility for their own mistakes and failures and consider them life lessons.

One of the most special traits of self-sufficient people is that they usually spend a lot of time with themselves. This contact with their own solitude has allowed them to learn to regulate their emotions.

The self-knowledge that traces their essence blends with their ability to manage feelings, rationalize thoughts, and regulate behaviors at all times. Their emotional intelligence drives the existential self-satisfaction that’s common in self-sufficient people.

Independence is about being in control of your life and feeling free to decide your own path. It’s what defines this type of personality. They know that many things are beyond their control and ability to control what surrounds them.

Disappointments, losses, crises, and twists of fate are some of the situations one can’t foresee. However, self-sufficient people accept them, know how to face adversity, and always try to survive any circumstance.

They’re neither cold nor detached and truly value authenticity

Some think that self-sufficient people are cold and detached. However, this isn’t true. These people appreciate affection but are careful about who they establish bonds with.

They value authenticity, sincere affection, true friendship, and enriching alliances that don’t limit their own freedom. Also, they’re people who don’t need to prove anything to anyone and who delight in the bonds they nurture. Above all, they truly respect themselves.

They Call Me Selfish For Thinking About Myself, I Call It Self Love
Read more »

The post The Main Traits of Self-Sufficient People appeared first on Exploring your mind.

The Characteristics of Attenuated Psychosis Syndrome