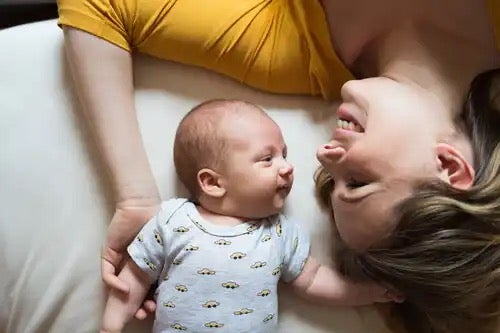 Mary Ainsworth first defined maternal sensitivity. Bowlby later developed his attachment theory based on her definition. He suggested that mothers respond differently to their children depending on how sensitive they are to their child’s needs.

Bowlby’s theory suggests that there are four types of attachment: secure, anxious-avoidant, anxious-ambivalent, and disorganized/disoriented. Each of these indicates the type of attachment the child develops towards their mother.

Although there’s a universal prototype of what a mother should be, not all women can adjust to it. This is because, sometimes, individual circumstances prevent the mother from conforming to this model. Let’s take a look at the four types of attachment styles.

“A mother is she who can take the place of all others but whose place no one else can take.”

Maternal sensitivity is usually measured on the Ainsworth Maternal Sensitivity Scale. It defines sensitivity in three ways. Firstly, the parent notices child signals. Secondly, they interpret these signals correctly. Thirdly, they respond to these signals promptly and appropriately.

When maternal sensitivity operates properly, the child develops a secure attachment and the sensitive mother emerges. This type of mother is able to perceive and interpret a wide range of emotions in her child. Furthermore, she’s able to regulate the flow of interaction between the two of them. In other words, the alternation between dialogue and silence. This kind of mother corresponds to the psychological model known as “the good enough mother”.

An anxious-avoidant attachment occurs with a mother who’s emotionally withdrawn. This manifests itself as an unwillingness to take care of her child. These types of mothers usually make light of their child’s negative emotions. For instance, they may say their child cries at the slightest little thing. In addition, they’re extremely resentful and easily irritated. In fact, they tend to scold their child a great deal and constantly threaten physical violence toward them to make them behave.

These kinds of mothers are controlling. They feel their child is the one who should adapt to them, even though they’re new to the world. They’re often inflexible and routinely resort to humiliation to punish their children. Nevertheless, despite all this, they like to come off as excellent mothers. Their children exhibit anti-social traits, with a tendency to narcissism and addictions.

With this kind of attachment, mothers respond to their children’s negative emotions in a somewhat poorly adjusted way. Furthermore, they become easily irritated by their child’s upset or anxiety.

These types of mothers are usually rigid and controlling. They find motherhood distressing. However, they compensate for this fact by an excessive concern for their children, resulting in a controlling kind of overprotection. This type of bond produces anxious children. They’ll tend to get in a bad mood for no apparent reason. In addition, they may feel inferior and will be extremely sensitive to criticism.

A disorganized form of attachment means that mothers can be both threatening and protective at the same time. They’re usually women who are distressed. Their ambiguous behavior with their child isn’t moderate, but extreme. In fact, they can move quickly from affectionate behavior to violence.

These mothers both love and mistreat their children at the same time. Their behavior isn’t consistent. In fact, gestures of affection and threats occur randomly. For instance, they might be protective for a long period of time and then become threatening.

Usually, these mothers haven’t healed their own childhood wounds. For this reason, they generate a bond of toxic dependence in their children. There’s also usually an element of confusion and instability. They often provide an education that makes risky behaviors more likely.

If you ask them, most mothers would say that they want their children to be happy. However, not all of them have a healthy idea of what happiness is nor are they always aware of their own inappropriate behaviors.

Harlow’s Experiments on Attachment Theory
Children who have been separated from their parents seek attachment in their future relationships. Attachment theory explains this. Read more »

The post Maternal Sensitivity and Attachment Styles appeared first on Exploring your mind.

Unconscious Attitudes that Prevent You from Finding Love