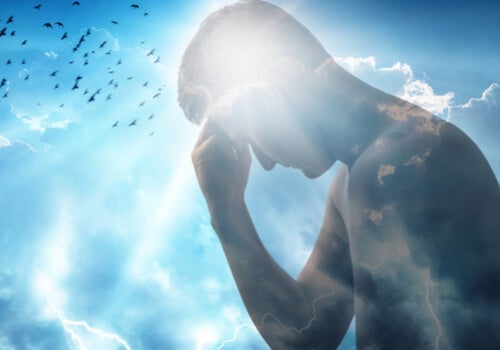 Your internal dialogue changes your brain. That daily conversation you have with yourself can strengthen a number of brain areas to help you better manage stress, regulate your mood, or even help you be more decisive. Conversely, the negative self-talk that wears you down can certainly lead you into highly debilitating and detrimental states.

There’s one particularly curious fact that many have experienced at some point or another. It’s common, for example, for you to be that tireless friend who’s always there when they need you. You stand out as that person who always gives words of encouragement. The one who always knows just what to say at any moment. In a way, you’re that unquestionable support for others, who instills courage, enthusiasm, and positivity with your always accurate way of communicating.

However, you’re your own worst enemy sometimes. This is because your internal dialogue often resonates with phrases such as: “How could you say such a stupid thing? You’re clumsy.” “Don’t even try again because you’re useless and you know it.” “Look at what happened today, you’re always wrong, you’re always making mistake after mistake.”

You’re what you tell yourself and, sometimes, you spend a lifetime with an abusive internal dialogue. It isn’t easy to change your inner speech when you’ve been doing it for so long. However, it’s necessary to do so for one obvious reason: negative inner dialogue changes the brain. It makes you more vulnerable to anxiety disorders and depression.

The impact of internal dialogue on behavior and personality has always interested psychologists. Books and publications on self-help and personal development abound and encourage you to take care of this dimension. In fact, the subject of inner speech has been under study since the beginning of the 20th century.

In fact, it was Lev Vygotsky, the Russian psychologist, who first wondered whether the brain uses the same mechanisms when a person speaks aloud as when they speak to themselves. Several studies reveal that areas such as the left inferior frontal gyrus (Broca’s area) activate when you talk to yourself. They’re also present when you communicate out loud though.

Inner speech is, therefore, a complex and multifaceted phenomenon. So much so that you should be more aware of how it affects your brain and psychological health. For example, Charles Fernyhough, a psychologist at Durham University, explained that inner chatter generates about 4,000 words per minute. According to his book The Voices Within: The History and Science of How We Talk to Ourselves, internal dialogue works ten times faster than verbal speech.

Thus, everything that happens in your mind, every idea, thought, self-instruction, and assertion, has an enormous impact on you, both positively and negatively.

John H. Krystal, the editor of the scientific journal Biological Psychiatry and professor at Yale School of Medicine, conducted a study demonstrating the impact of emotions on the brain. It revealed how persistent negative internal dialogue weakened multiple neural structures. This is because it makes people much more vulnerable to stress.

Structures such as the insula and the amygdala showed high hyperactivity. These areas related to emotions such as fear or attention to threats in your environment sometimes plunge you into states of great psychological exhaustion. Moreover, you can’t overlook the fact that negative dialogue is the substrate that feeds anxiety. It often places you in the labyrinth of depression.

“Anyone can plot a course with a map or compass; but without a sense of who you are, you will never know if you’re already home.”

Thoughts and health: what would happen if you speak more affectionately to yourself?

You must be aware of one thing: that your internal dialogue can directly affect your health, both physical and psychological. That limiting self-talk impairs your self-esteem and shuts down your potential, resources, and opportunities. Thus, you must change its focus.

You must be able to change this harmful discourse. A simple way to achieve this is by addressing yourself in the second person instead of in the first person. This is a way to assume the role of that friend who wishes the best for you but who, at the same time, is always attentive to correct your internal dialogue.

The following dialogue is an example: “I understand you’re worried, but remember that you know how to overcome it. You’ve done it before, so trust that you deserve the best. You’re strong, just keep trying”.

Finally, this process takes time. Changing that limiting internal discourse may be hard at first, but you’ll see changes progressively if you commit to it. Here’s what an old Chinese proverb has to say about this:

The Phi Phenomenon: The Optical Illusion Your Brain Creates
The phi phenomenon (φ) was a key concept to Gestalt. This optical illusion makes us believe that fixed images are moving. Read more »

The post Your Internal Dialogue Changes Your Brain appeared first on Exploring your mind.

Keys for Learning to Listen